How to Deal With Personal Dissatisfaction
0 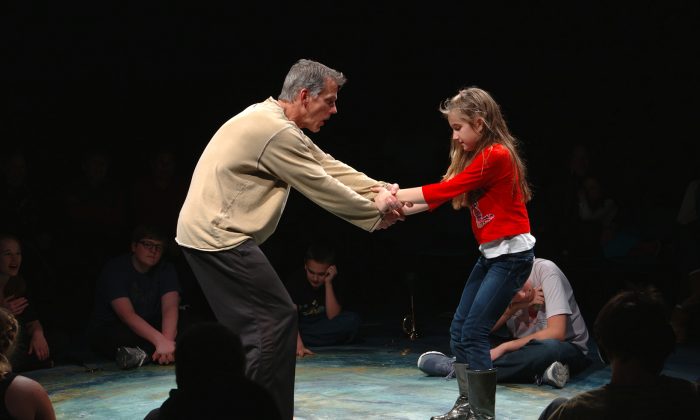 For centuries, the plays of William Shakespeare have been celebrated for their larger-than-life storytelling and rhythmic language. Now the Bard’s work is being studied as a way to help children overcome challenges associated with autism.

Autism is a general term for a group of developmental disorders that may affect as many as one in every 45 children aged 3 to 17 in the United States, according to a recent government survey.

It can severely impair social and communication skills that most people take for granted. Children with this disorder often aren’t tuned into the subtle emotional expression of their peers and, as a result, tend to be loners who are often more comfortable with a computer than interacting with others.

The idea is that if kids with autism can act out social interaction, it won’t seem so confusing in the real world.

HHM provides a playful opportunity to practice and understand emotional expression through drama games related to a particular play. The idea is that if kids with autism can act out social interaction, it won’t seem so confusing in the real world.

For the past 20 years, HHM has earned much anecdotal success, but Hunter wanted something more. Six years ago, she teamed up with researchers at the Nisonger Center at The Ohio State University (OSU) to evaluate how HHM would perform under scientific scrutiny.

Results from a recently published pilot study concluded that HHM may be an effective approach. Researchers noted significant improvements in social involvement, language skills, and the ability to identify facial expressions.

According to Margaret H. Mehling, an OSU graduate assistant and the study’s research coordinator, there are a lot of good evidence-based treatments for autism, but HHM has a distinct advantage.

“Kids like to have fun and play games more than they like sitting and listening to more classroom-style learning,” Mehling said. “This is more fun, and it’s experienced-based learning. It looks more like what typically developing kids are doing, and I think there is some inherent value in that.”

This is more fun, and it’s experienced-based learning. It looks more like what typically developing kids are doing, and I think there is some inherent value in that.
— Margaret H. Mehling, research coordinator, Ohio State University

HHM uses some of the same social skills interventions found in other techniques, such as demonstration, repeated practice, performance, and feedback.

“The same teaching mechanisms are there, but they are in a fun costume,” Mehling said. “With more traditional treatments, I’ve had to work with parents to help them find ways to incentivize the kids to go to treatment. … These drama games are fun, so they’re intrinsically reinforcing.”

Committed to the Role

Another distinction is the facilitator. Traditional autism interventions are facilitated by a counselor, teacher, or psychologist, but facilitators in Hunter’s method are trained actors.

“I would feel awkward if I were to run this group, so I would make the kids feel awkward, then everyone would be uncomfortable,” Mehling said. “But these actors are so skilled in their craft and completely in character while playing these games. They put these kids so at ease to experiment with different emotions and ways of being.

“[The kids] are given this very safe and fun place to practice social skills where they’re not going to be judged or rejected, or get negative feedback.”

The Heartbeat of Shakespeare

OSU drama professor Kevin McClatchy is one of the artist-facilitators in the study. He has seen HHM help children overcome various obstacles, from recognizing the boundaries of personal space, to talking.

“Verbal skills are profoundly difficult for some kids, but over the course of a workshop you’ll see them snapping off a line of complex text,” McClatchy said. “You’ll see a child become more and more adept at eye contact until they develop what we consider more socially common eye contact.”

Shakespeare may seem like an odd tool for treatment, but his work has features that make it uniquely suited for the task.

The heartbeat rhythm and the big emotional displays of Shakespeare’s work make them perfect for the program.

Research finds that people with autism and other neurological issues respond well to rhythmic interventions. At the heart of HHM is the rhythm of Shakespearian language. Hunter found that kids respond well to the “da-dum, da-dum” cadence of iambic pentameter—a rhythmic pattern found in all of Shakespeare’s work. Children with autism also appreciate routine and repetition, so each session of HHM begins and ends with an emphasis on this heartbeat pattern.

“The heartbeat is arguably the first thing we register in the womb,” McClatchy said. For HHM, “it becomes a soothing, familiar gateway into the work.”

The heartbeat rhythm and the big emotional displays of Shakespeare’s work make them perfect for the program, according to Hunter.

This can help autistic children who cannot pick up on emotional subtleties, she said.

Within the comforting heartbeat cadence, children act out the different emotions of the characters in the play. Games are developed using various plot points and lines of text to target specific social challenges. The games can be tailored to each child’s strengths and weaknesses.

Previously, Hunter used “A Midsummer Night’s Dream” for her intervention. For the USO study, researchers chose “The Tempest.”

“The Tempest” is one of Shakespeare’s more magical tales. The characters (which include a sorcerer and his daughter, the son of a witch, a slave sprite, and various Italian royalty) find themselves shipwrecked on an island for 12 years.

“The themes of ‘The Tempest’ speak specifically to the things kids with autism have,” said McClatchy. “The characters are stranded on a strange island. It’s a place where you can’t escape, and there are people there who are not familiar to you, and don’t experience the world in the same way you do.”

Another important aspect of “The Tempest” is that it involves a world of fantasy and imagination. McClatchy says that choosing a play with a magical theme helps kids with autism build a bridge from their complex inner worlds so that they can clearly communicate their feelings to the outer world.

“Sometimes they have difficulty expressing that inner life. Shakespeare’s language helps break through that communicative block. It is uniquely equipped to help kids unlock that,” McClatchy said.

“I’m Kevin until I step into the circle. Then I’m Caliban, who is half fish, half monster. We step outside the circle, and I’m Kevin again, and I teach them some games related to the play. Then I step inside the circle and I’m Prospero, a wizard. There’s a really clear delineation between Kevin and this character I’m playing that allows me to use my imagination.”

The recently published study on HHM is small—just 14 children aged 10 to 13 and no control group—and designed to establish feasibility, Mehling said. Other studies are already in the works, including one that uses neuroimaging to look at impacts on the brain.

Mehling also hopes to look at how HHM affects other measures, such as heart rate variability and cortisol levels, a marker of stress and anxiety.

And they’d like to try the intervention with older children.

Establishing the scientific validity of any treatment takes time, but parents have said they noticed changes in their children right away.

“I … heard his laughter and knew that he was enamored. … He was engaged and soaking up the energy and even participated as part of a group, and that is uncommon,” wrote one parent, in response to the study’s Social Validity Questionnaire.

“[My son] usually wants to do nothing but solitary computer and video games, and for him to enjoy being in a social setting was great. At one point, he even said he wanted to be an actor,” another parent wrote.

“My daughter loved the class. She left happy and excited every time. She loved feeling included and part of a group. We noticed that she was trying harder at school to make friends,” wrote another parent.