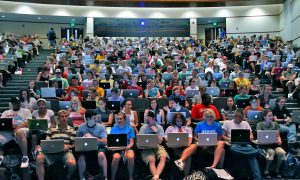 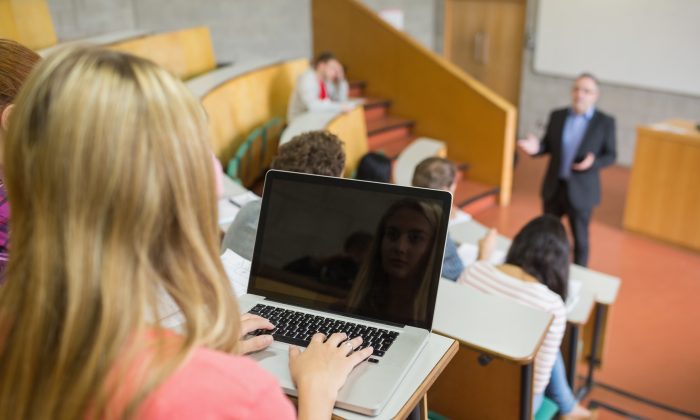 A series of U.S. studies shows that students retain less information if taking lecture notes on a laptop rather than by hand. (Wavebreakmedia/Wavebreak Media/Thinkstock)
Canada

As the debate around laptops in the classroom continues, a series of U.S. studies shows that the use of technology to aid learning may not always have a positive outcome.

New research by Princeton University researcher Pam Mueller and Daniel Oppenheimer of the University of California shows that the use of laptops for taking notes—which is becoming increasingly common—impedes learning.

In three studies titled “The Pen Is Mightier Than the Keyboard: Advantages of Longhand Over Laptop Note-Taking,” the researchers found that students retain less information if taking lecture notes on a laptop rather than by hand.

In different experiments, the students were asked to watch lectures and then respond to questions based on the lectures. The studies found that the students using pen and paper performed significantly better compared to those using laptops—even after they were told about laptop users’ tendency to transcribe without thinking and asking them to think about what they wrote.

In another experiment, the researchers examined whether students using laptops were able to more effectively use their notes to prepare for exams, compared to those using pen and paper. Students were asked to watch lectures and take a test the following week, using their notes to prepare. The results showed that students using pen and paper still performed significantly better.

“We show that whereas taking more notes can be beneficial, laptop note-takers’ tendency to transcribe lectures verbatim rather than processing information and reframing it in their own words is detrimental to learning,” Mueller and Oppenheimer wrote in an abstract of the study.

The researchers note that while prior studies have mostly focused on students’ capacity for multitasking and distraction when using laptops, their research suggests that “even when laptops are used solely to take notes, they may still be impairing learning because their use results in shallower processing.”

“The results suggest that multitasking on a laptop is a distraction of both users and fellow students and can be detrimental to learning of classroom materials,” said the York University and McMaster University researchers.