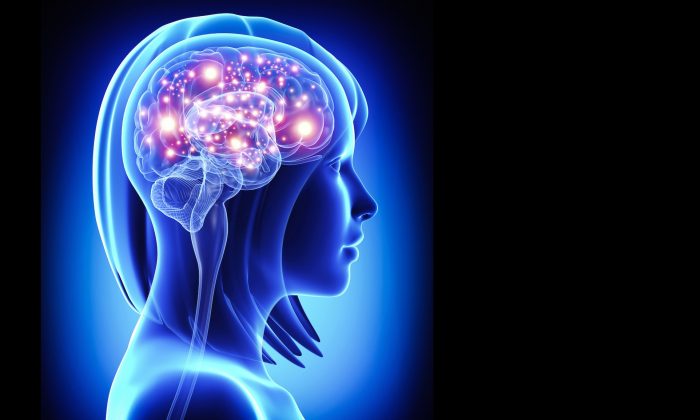 "It's useful to think of your brain as housing a very large toolkit," said Scott Grafton. (Pixologic studio/iStock/Thinkstock)
Science

Why are some people able to master a new skill quickly while others require extra time or practice? To find the answer, researchers designed a study that measured the connections between different brain regions while participants learned to play a simple game.

The researchers discovered that the neural activity in the quickest learners was different from that of the slowest. Their analysis provides new insight into what happens in the brain during the learning process and sheds light on the role of interactions between different regions.

The findings, which appear online in Nature Neuroscience, suggest that recruiting unnecessary parts of the brain for a given task—similar to overthinking the problem—plays a critical role in this important difference.

“It’s useful to think of your brain as housing a very large toolkit,” said Scott Grafton, a professor in University of California–Santa Barbara’s department of psychological and brain sciences.

Do Mobile Devices in the Classroom Really Improve Learning Outcomes?

“When you start to learn a challenging new skill, such as playing a musical instrument, your brain uses many different tools in a desperate attempt to produce anything remotely close to music. With time and practice, fewer tools are needed and core motor areas are able to support most of the behavior.

“What our laboratory study shows is that beyond a certain amount of practice, some of these cognitive tools might actually be getting in the way of further learning.”

At the university’s Brain Imaging Center, study participants played a simple game while their brains were scanned with fMRI. The technique measures neural activity by tracking the flow of blood in the brain, highlighting which regions are involved in a given task.

Participants responded to a sequence of color-coded notes by pressing the corresponding button on a hand-held controller. Six predetermined sequences of 10 notes each were shown multiple times during the scanning sessions. Subjects were instructed to play the sequences as quickly and as accurately as possible, responding to the cues they saw on a screen.

The study continued with participants practicing at home while researchers monitored their activity remotely. Subjects returned to the Brain Imaging Center at two-, four- and six-week intervals for new scans that demonstrated how well practice had helped them master the skill. Completion time for all participants dropped over the course of the study but did so at different rates. Some picked up the sequences immediately, while others gradually improved over the six-week period.

Lead author Danielle Bassett, an expert in network science, developed new analysis methods to determine what was happening in the participants’ brains that correlated with these differences. But rather than trying to find a single spot in the brain that was more or less active, the team investigated the learning process as the function of a complex, dynamic network involving various regions of the brain.

“We weren’t using the traditional fMRI approach where you pick a region of interest and see if it lights up,” said Bassett, assistant professor of innovation at the University of Pennsylvania. “We looked at the whole brain at once and saw which parts were communicating with each other the most.”

The investigators compared the activation patterns of 112 anatomical regions of the brain and measured the degree to which they mirrored one another. The more the patterns of two regions matched, the more they were considered to be in communication. By graphing those connections, the team found that hotspots of highly interconnected regions emerged.

“When network scientists look at these graphs, they see what is known as community structure,” Bassett said. “There are sets of nodes in a network that are really densely interconnected to each other. Everything else is either independent or very loosely connected with only a few lines.”

The team used a technique known as dynamic community detection, a method that employs algorithms to determine which nodes are incorporated into these clusters and how their interactions change over time.

This allowed the researchers to measure how common it was for any two nodes to remain in the same cluster while subjects practiced the same sequence some 10 times. Through these comparisons, they found overarching trends about how regions responsible for different functions worked together.

The researchers discovered that the visual and the motor blocks had a lot of connectivity during the first few trials, but as the experiment progressed they became essentially autonomous. For example, the part of the brain that controls finger movement and the part that processes visual stimulus didn’t really interact at all by the end of the experiment.

According to Grafton, in some ways this trend was not surprising since the team was essentially seeing the learning process on the neurological level, with the participants’ brains reorganizing the flow of activity as they mastered this new skill.

“Previous brain imaging research has mostly looked at skill learning over—at most—a few days of practice, which is silly,” said Grafton, who is also a member of the university’s Institute for Collaborative Biotechnologies. “Who ever learned to play the violin in an afternoon?

“By studying the effects of dedicated practice over many weeks, we gain insight into never before observed changes in the brain. These reveal fundamental insights into skill learning that are akin to the kinds of learning we must achieve in the real world.”

With the neurological correlates of the learning process coming into focus, the scientists were able to delve into the differences among participants in order to explain why some learned the sequences faster than others. Counterintuitive as it may seem, the participants who showed decreased neural activity learned the fastest.

Counterintuitive as it may seem, the participants who showed decreased neural activity learned the fastest.

The critical distinction was in areas not directly related to seeing the cues or playing the notes: the frontal cortex and the anterior cingulate cortex.

These cognitive control centers are thought to be most responsible for what is known as executive function. “This neurological trait is associated with making and following through with plans, spotting and avoiding errors, and other higher-order types of thinking,” Grafton said.

“In fact, good executive function is necessary for complex tasks but might actually be a hindrance to mastering simple ones.”

Grafton also noted that the frontal cortex and the anterior cingulate cortex are among the last brain regions to fully develop in humans, which may help explain why children are able to acquire new skills quickly as compared to adults.

“It’s the people who can turn off the communication to these parts of their brain the quickest who have the steepest drop-off in their completion times,” said Bassett. “It seems like those other parts are getting in the way for the slower learners. It’s almost like they’re trying too hard and overthinking it.”

Additional studies will delve into why some people are better than others at shutting down the connections in these parts of the brains.

Other authors include Muzhi Yang of the University of Pennsylvania and Nicholas Wymbs of Johns Hopkins University.

Julie Cohen is a science writer at University of California–Santa Barbara. This article was previously published on Futurity.org. Republished under Creative Commons License 4.0.