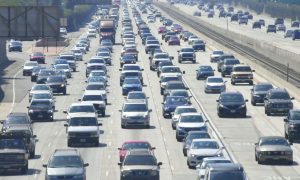 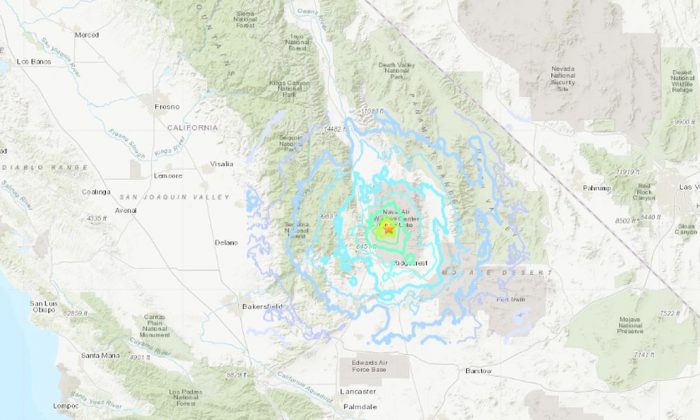 A 5.0 magnitude earthquake hit Ridgecrest, California, on the afternoon of Aug. 22 (USGS)
US News

A 5.0 magnitude earthquake hit Ridgecrest, California, on the afternoon of Aug. 22—among thousands of aftershocks to hit the region.

The tremor hit at around 1:49 p.m. and had an epicenter within the Naval Air Warfare Center China Lake property in Inyo County, said the U.S. Geological Survey (USGS).

It hit about 20 miles north of Ridgecrest, the agency said.

Another strong earthquake in California. This one a 5.0…along the same fault that gave way to a bunch of strong quakes in early July. pic.twitter.com/SdWDsQkGtX

There were no reports of damage or injury, reported KTLA, which added that people reported feeling shaking in the San Fernando, Santa Clarita, and Central valleys.

Some 80,000 earthquakes are estimated to have rattled the region since July 4 when a 6.4 magnitude earthquake struck the area. A day later, a 7.1 quake hit, cracking building, setting fires, and damaging roads.

#BREAKING: An earthquake with an epicenter north of Ridgecrest, California, was felt in downtown Las Vegas Thursday afternoon.https://t.co/KK8mJRRbYo

“It is a wake-up call for the rest of the state and other parts of the nation, frankly,” Newsom said at a weekend news conference on efforts to help a desert region jolted by back-to-back quakes.

The quakes buckled highways and ruptured gas lines that sparked several house fires, and officials said about 50 homes in the nearby small town of Trona were damaged. No one was killed or seriously injured, which authorities attributed to the remote location in the Mojave Desert.

“Any time that we can go through a 7-point earthquake and we do not report a fatality, a major injury, do not suffer structure damage that was significant, I want to say that that was a blessing and a miracle,” Kern County Fire Department spokesman Andrew Freeborn said July 7.

“That’s unlikely to continue in the long run,” she added. “Geology keeps on moving … and we should be expecting a higher rate. And when it happens near people, it is going to be a lot worse.”