Users Reject PayPal’s Attempt to Limit Speech. They Should.

The payments company says a revised notice recently went out in error. But users are skeptical. 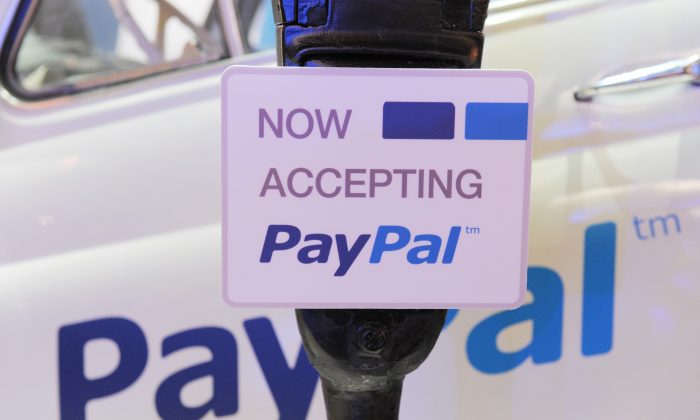 A PayPal sign at the LeWeb expo in Paris on Dec. 5, 2012. (Eric Piermont/AFP/Getty Images)

An update to the Acceptable Use Policy (AUP) of PayPal, the multinational payments platform, was interpreted to say the company will withhold up to $2,500 of account holders’ funds as “liquidated damages” if  users “provide false, inaccurate, or misleading information.”  The new policy was first highlighted by the Daily Wire on Oct. 7.

It’s hard for me to openly criticize a company I used to love and gave so much to. But @PayPal’s new AUP goes against everything I believe in. A private company now gets to decide to take your money if you say something they disagree with. Insanity. https://t.co/Gzf8faChUb

Tech auteur Elon Musk, who had been an early developer of the PayPal payment platform, reportedly tweeted he “Agreed” with Marcus.

Several hundred users on Twitter said they were dropping their accounts.

After the backlash, National Review reported last evening that PayPal had written to its editors saying:

“An AUP notice recently went out in error that included incorrect information. PayPal is not fining people for misinformation and this language was never intended to be inserted in our policy. Our teams are working to correct our policy pages. We’re sorry for the confusion this has caused

However, as of Sunday morning, the terms remain on PayPal’s website and the @PayPal Twitter account had not addressed the issue. By the wee hours of Sunday morning, #BankruptPayPal was trending on the social media site. And users were understandably skeptical of the walk-back.

The policies drawing public ire, unchanged as of Sunday afternoon at 1:00PM EDT, include the following:

In connection with your use of our websites, your PayPal account, the PayPal services, or in the course of your interactions with PayPal, other PayPal customers, or third parties, you must not…

PayPal’s actions would reasonably lead one to believe it aligns itself with what are called “progressive” policies. Consider these examples:

PayPal also appears to be an obsequious subordinate to the sometimes mercurial policies of hyper-local authorities, like county and city authorities. Note that PayPal tells its users, “You must not … violate any ordinance, or regulation … (for example … anti-discrimination.)”[Emphasis is mine.]

That should be troubling, as it will tend to legitimize the mores that many hyper-local lawmakers have adopted without much notice and remain, for most, unsettled as standard civil behavior. Some of these restrict free speech or even impose required speech or actions by individuals or businesses.

Here in New York City, for example, a regulation implementing a local anti-discrimination ordinance “requires employers and covered entities to use the name, pronouns, and title (e.g., Ms./Mrs./Mx.) with which a person self-identifies, regardless of the person’s sex assigned at birth, anatomy, gender, medical history, appearance, or the sex indicated on the person’s identification.”

Fines up to $125,000 can be imposed for violations, and they can be doubled if the violation is “willful, wanton, or malicious.” Notwithstanding that the regulation may be unconstitutional on its face, it is on the books, so PayPal might suspend an account for failing to use the preferred pronoun of a transgender celebrity. Imagine how that would work for some of the orthodox Jewish or Muslim newspapers or websites.

PayPal is a lifeline for tens of thousands of small business owners, as well as millions of people with limited access to credit. Seemingly arbitrary suspension of accounts—sometimes for as much as six months—is a significant and substantial interference with Congress’s prerogative to regulate commerce. As a private company, that’s likely legal, but it should not stand any more than a private company denying, say, a bus or flight service to someone based on their political views.

When the new Congress convenes in January, the House Financial Services Committee and the Senate Banking Committee need to propose and pass regulations that would treat financial services websites the same as public utilities or common carriers. Those people selling items that are illegal, or conspiring to engage in criminal activity, can be pursued by criminal investigators (who may, in fact, be aided by the digital roadmap they provide when using sites like PayPal).

But it’s inappropriate—indeed, dangerous—for private corporations to impose their standards based on the views of users, even when those views are patently offensive; even if they are hateful. We can hate the vile speech of racists, anti-Semites, Nazis, Klansmen, and the rest of the putrid panoply of congenital haters, left and right, religious and secular, Democrat, Republican, and unaligned. They seem everywhere of late. But their speech is protected unless and until it rises to become what the courts have defined as a “clear and present danger.”

Part of the price of living in a free society is having to endure the vile, odious speech of others whose hateful views we find contemptible. But, in the words of Justice Louis Brandeis, “to avert … evil … the remedy to be applied is more speech, not enforced silence.”

And PayPal should not be the arbiter of what can be permitted.

NOTE: Our commentaries most often tend to be event-driven. They are mostly written from a public policy, economic, or political/geopolitical perspective. Some are written from a management consulting perspective for companies that we believe to be under-performing and include strategies that we would recommend were the companies our clients. Others discuss new management strategies we believe will fail. This approach lends special value to contrarian investors to uncover potential opportunities in companies that are otherwise in a downturn. (Opinions with respect to such companies here, however, assume the company will not change).

DISCLOSURE I/we have no stock, option or similar derivative position in any of the companies mentioned, and no plans to initiate any such positions within the next 72 hours. I wrote this article myself, and it expresses my own opinions. I am not receiving compensation for it (other than from The Epoch Times). I have no business relationship with any company whose stock is mentioned in this article.

ADDITIONAL DISCLOSURE:  The views expressed, including the outcome of future events, are the opinions of the firm and its management only as of October 9, 2022, at 1:30PM, and will not be revised for events after this document was submitted to The Epoch Times’ editors for publication. Statements herein do not represent, and should not be considered to be, investment advice. You should not use this article for that purpose. This article includes forward looking statements as to future events that may or may not develop as the writer opines. Before making any investment decision you should consult your own investment, business, legal, tax, and financial advisers. We associate with principals of TechnoMetrica on survey work in some elements of our business. This article does not rely on any TechnoMetrica data.