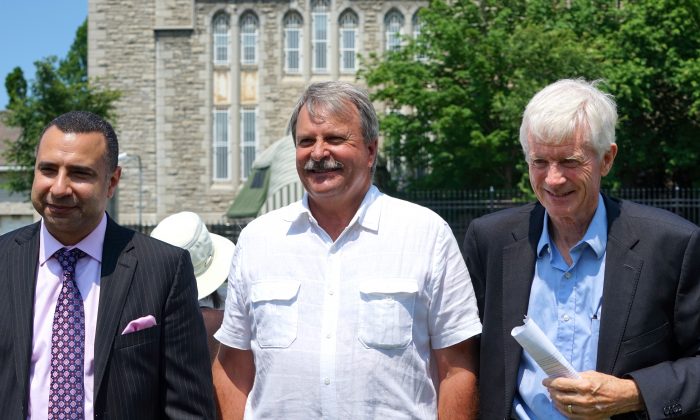 (L-R) Rev. Majed El Shafie of One Free World International, Ontario MPP Jack MacLaren, and former MP Hon. David Kilgour at a rally outside the Chinese embassy in Ottawa on July 20, 2016, to mark the 17th anniversary of the persecution against Falun Gong in China, launched by former Chinese Communist Party leader Jiang Zemin on July 20, 1999. The three men spoke at the event and condemned the Chinese regime’s illegal persecution against the traditional spiritual practice as well as the state-led killing of Falun Gong prisoners of conscience for their organs in China. (Pam McLennan/Epoch Times)
Canada

‘Use Every Opportunity’ to Urge Beijing to End Organ Harvesting, Kilgour Tells Trudeau

OTTAWA, Canada—As Prime Minister Justin Trudeau prepares to go to China in early September for the G20 summit, David Kilgour is calling on him for help to end a “state crime” involving “mass murder” taking place there that the former MP has spent the last 10 years investigating.

“Prime Minister Trudeau … and his government should use every opportunity to urge the party state in Beijing to end forced organ pillaging and trafficking—now,” said Kilgour.

Kilgour is the co-author of a recent report update that adds further evidence to allegations that the Chinese regime is forcibly harvesting organs from prisoners of conscience, primarily Falun Gong practitioners, to supply a massive state-led transplant industry worth billions of dollars per year.

He made the comments in front of the Chinese embassy on July 20 at a rally to mark 17 years since former Communist Party leader Jiang Zemin launched the persecution of the Falun Gong spiritual practice. The gathering was part of a large commemorative and awareness-raising event taking place worldwide.

Amid such an urgent crisis, “[Trudeau] should help bring Jiang Zemin, who initiated and orchestrated the persecution, to justice quickly,” Kilgour added.

According to the Minghui website, which reports on Falun Gong worldwide, since May 2015 more than 200,000 Chinese citizens have filed criminal lawsuits against Jiang in the regime’s highest legal bodies, charging him with genocide, torture, and crimes against humanity.

Prime Minister Trudeau … and his government should use every opportunity to urge the party state in Beijing to end forced organ pillaging and trafficking—now.
— Former cabinet minister David Kilgour

‘Strength and character to stand by your principles’

Kilgour was joined at the rally by Rev. Majed El Shafie, who is a human rights advocate and founder of One Free World International, along with Ontario MPP Jack MacLaren.

Commenting on Falun Gong’s core principles of Truthfulness, Compassion, and Tolerance, MacLaren told the practitioners that “having the strength and character to stand by your principles … strikes fear in the heart of the communist government, because there is nothing so fearful to a tyrant, to a dictator, as a free man and a free woman.”

“I don’t think anywhere have we seen a worse human rights abuse than in China against the Falun Gong,” MacLaren added, noting the “heinous crime of organ harvesting.”

El Shafie commended Falun Gong practitioners for their peaceful resistance and perseverance. “Seventeen years ago, [the Chinese government] government thought that they can finish the Falun Gong, they can end them, they can kill them … they can collect their organs and run away,” he said.

According to the New York-based Falun Dafa Information Center, Falun Gong, also called Falun Dafa, is now practised in over 80 countries, with both its health benefits and moral philosophy contributing to its popularity.

Among the conclusions of the report, released June 22 in Washington, is that China is performing a staggering 60,000 to 100,000 transplants annually, while boasting wait times of days or weeks. This is extraordinary considering voluntary organ donations are rare in China and wait times are typically in years in other countries.

And the source for the vast majority of those organs is the killing of “mostly innocents, prisoners of conscience, Tibetans, Uyghurs, select House Christians, and, most of all, Falun Gong practitioners,” according to the report, an update on the books “The Slaughter” (2014) and “Bloody Harvest” (2009) by Gutmann and by Matas-Kilgour respectively.

The update is “a meticulous examination of the transplant programs of hundreds of hospitals in China,” Kilgour said. “It analyzes hospital revenue, bed counts and utilization rates, surgical personnel, training programs, state funding, and other factors.”

Kilgour shared some developments giving rise to optimism. In June the U.S. House of Representatives unanimously passed a resolution condemning the state-sanctioned organ harvesting in China.

And this month more than half of the members of the European Parliament (EP) signed a declaration asking the EP to “organize without delay an independent investigation” into the Chinese regime’s ongoing organ pillaging.

Kilgour also praised the elected leaders in Israel, Taiwan, and Spain, which have passed laws making it illegal for their citizens to get organ transplants in China.

Looking to Trudeau, Kilgour said he salutes the prime minister for the stand he took on human rights in China with Chinese foreign minister Wang Yi when Yi visited Canada in June. Yi had berated a Canadian reporter after she asked a question about China’s human rights record.

“There is no question that China has an awful lot to do on human rights.”
— Prime Minister Justin Trudeau

A week later, Trudeau addressed this in Toronto at The Canada Summit hosted by The Economist, saying that “Canada has a very clear role to play as a country with a long and storied friendship with China to be able to say, ‘Look, you need to change the way you speak to journalists. You need to change the defensiveness you have about how you’re engaging with the world because it’s not doing you any service.”

“It’s going to take countries with a good relationship with China to be fairly blunt with China about how it’s going to succeed,” Trudeau said, noting that “There is no question that China has an awful lot to do on human rights.”

At his upcoming meetings with Chinese leaders in September, concerned Canadians will be looking to Trudeau to demonstrate this frankness, including in calling for an end to the organ pillaging and Falun Gong persecution, which Kilgour and Matas have described as “the kernel at the centre of human rights violations in China.”