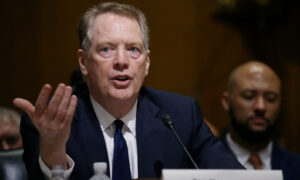 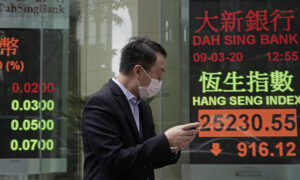 Under Pressure in the US, Chinese Firms Seek Share Sales in Hong Kong
0 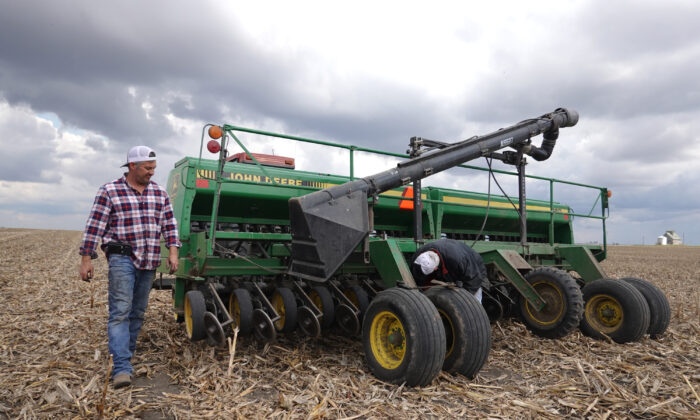 John Duffy (R) and his son Dan make a repair to a grain drill while planting soybeans near Dwight, Ill., on April 23, 2020. (Scott Olson/Getty Images)
US News

WASHINGTON—The Trump administration expressed disappointment and frustration over Beijing’s slow progress on meeting its pledges in the “phase one” trade deal signed in mid-January.

The trade data for the first three months shows that China is far behind the pace necessary to meet its purchase target in 2020.

“While there has been progress on removing barriers to our exports, China’s purchases so far this year have been very disappointing,” a spokesperson for the U.S. Department of Agriculture (USDA) told The Epoch Times in an email.

Despite the outbreak, China has continued to import farm products.

“In particular, China has sourced imports from other suppliers this year, and our market share for a number of products has declined from 2017 levels despite the phase one agreement,” the spokesperson said.

Beijing pledged to buy $200 billion worth of additional U.S. goods and services over the next two years as part of the phase one pact, which went into effect in mid-February.

This means China has to import at least $80 billion of U.S. agricultural products over the next two years.

China’s farm purchases from the United States stood at only $5.1 billion in the first quarter of this year. In order to satisfy the deal, Beijing has to accelerate its purchases sharply in the coming months.

“There are steps China can take immediately to facilitate imports of U.S. products, steps we think are necessary for China to fulfill its commitments under the agreement,” the spokesperson said.

U.S. agriculture has been crucial for the phase one trade agreement, as China was the largest export market for U.S. farm products in 2017 before the trade war started.

Farmers were particularly hard hit by Beijing’s retaliatory tariffs. Nearly $30 billion of U.S. farm exports were subject to China’s tariffs, according to a report by the Center for Agricultural Trade at Virginia Tech. As a result of the conflict, U.S. agricultural exports to China decreased by 54 percent in 2018. Despite a slight uptick in 2019, exports are still well behind 2017 levels.

While China has a fifth of the world’s population, it has only one-tenth of the world’s arable land. Hence the country is heavily dependent on imports of farm products, particularly soybeans, cotton, sorghum, wheat, nuts, and pork.

Trump said of the phase one deal in 2019, “There’s never been a deal of this magnitude for the American farmer.” He suggested farmers “buy more land and get bigger tractors.”

However, he voiced disappointment over China’s purchases recently and threatened to terminate the deal if Beijing fails to follow through on its promises.

He said on May 6 that he would report “in about a week or two” on whether he’s happy with China’s progress.

“I will be able to report on that at the end of next week. They’re buying a lot of farm products, but are they buying to the level that they were supposed to?”

Trump earlier indicated that he would consider new tariffs on Chinese goods for Beijing’s mishandling of the coronavirus outbreak.

The tensions between the United States and China have intensified in recent weeks, which could spill over into another trade war, according to experts.

The phase one pact requires China to increase its purchases by $76.7 billion in 2020 from the 2017 baseline level. That means China needs to buy more than $260 billion U.S. agricultural goods, manufactured goods, energy products, and services this year.

There’s progress being made on the phase one deal, particularly the removal of some nontariff barriers on agricultural access into China, according to Riley Walters, senior policy analyst and economist at The Heritage Foundation.

“The only problem is purchasing commitments,” he told The Epoch Times.

“When the deal was signed in January, no one thought China would be able to make the purchasing commitments then. And it’s certainly not going to be able to make it now unless there’s just this huge uptick.”