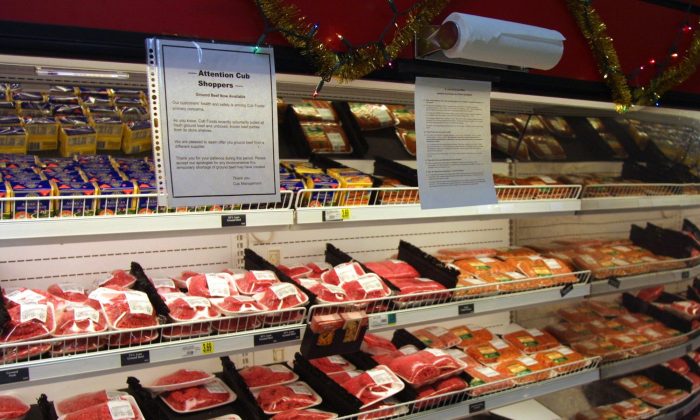 At least 28,000 pounds of ground beef was recalled in seven U.S. states over E. coli concerns, said the U.S. Department of Agriculture’s (USDA) Food and Safety Inspection Service in a release on Thursday.

Interstate Meat Dist. Inc., of Clackamas, Oregon, said it is recalling some 28,356 pounds of ground beef products that might be contaminated with the bacteria. The items were produced on Dec. 20, 2021, and the items’ details and labels can be accessed at the USDA’s website.

The recalled products were shipped to retail locations in Arizona, California, Nevada, Oregon, Utah, Washington, and Wyoming, according to the release. They have the number “EST. 965” in the USDA mark of inspection.

“The issue was reported to FSIS after a retail package of ground beef was purchased and submitted to a third-party laboratory for microbiological analysis and the sample tested positive for E. coli O157:H7. FSIS conducted an assessment of the third-party laboratory’s accreditation and methodologies and determined the results were actionable,” the agency wrote.

The alert is being sent out because the USDA “is concerned that some product may be in consumers’ refrigerators or freezers,” the agency said. “Consumers who have purchased these products are urged not to consume them. These products should be thrown away or returned to the place of purchase.”

Other details about the recall were not provided.

According to the Mayo Clinic, symptoms of E. coli start between three and four days after exposure to the bacteria, although some people can become ill as soon as one day after exposure.

Symptoms generally include stomach problems, including diarrhea—which could range from mild and watery to severe and bloody—as well as stomach cramping, pain or tenderness, and nausea and vomiting.

Exposure via contaminated ground beef is one of the most common ways E. coli is transmitted to people, says the Mayo Clinic, which recently confirmed it fired 700 healthcare workers for not getting the COVID-19 vaccine despite a healthcare group’s recent warning about staffing shortages.

“When cattle are slaughtered and processed, E. coli bacteria in their intestines can get on the meat. Ground beef combines meat from many different animals, increasing the risk of contamination,” said the Minnesota-based organization.

E. coli also can be transmitted via raw milk, and “runoff from cattle farms can contaminate fields where fresh produce is grown,” according to the Mayo Clinic. “Certain vegetables, such as spinach and lettuce, are particularly vulnerable to this type of contamination.”