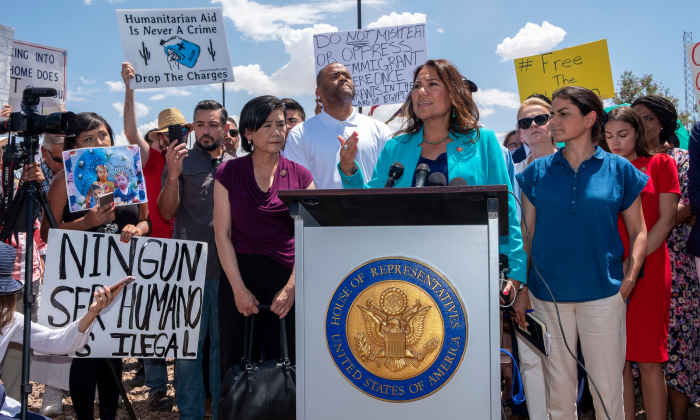 The acting director of U.S. Citizenship and Immigration Services denounced a Democratic congresswoman on July 8 after a report alleged that she used taxpayer money to send her staff to Mexico to coach migrants on ways to exploit loopholes in the asylum system and enter the United States.

U.S. Citizenship and Immigration Services acting Director Ken Cuccinelli was responding to a report by The Washington Examiner that claimed that Rep. Veronica Escobar (D-Texas) has been sending congressional aides to Juarez, Mexico, to find asylum-seekers who were returned to Mexico and help them exploit loopholes in asylum laws by making false claims. The report cited anonymous Customs and Border Protection personnel, members of the National Border Patrol Council’s El Paso chapter, and immigration documents, including a form bearing Escobar’s congressional seal.

“If true this would be nothing short of aiding & abetting criminal activity. Entering this country illegally is a crime! If true, the Congresswoman must stop allocating American taxpayer $$$ from her office budget to help people illegally enter our country,” Cuccinelli wrote on Twitter.

Escobar’s staff have interviewed thousands of migrants in Juarez in order to find asylum seekers who were wrongly returned to Mexico, the report claims. The staff has also coached some migrants to pretend as if they don’t speak Spanish, as that would enable them to enter the United States under an exception in the Migration Protection Protocols (MPP), according to the newspaper.

Escobar claims the Examiner story was fabricated. She wrote on Twitter that her office has received death threats since the publication of the story.

“This hit piece is fueled by xenophobia and misinformation. But guess what, guys? These attacks won’t deter me doing my job, upholding my oath, and pushing for accountability,” Escobar said.

In one incident alleged in the report, an Escobar aide and a diocese official walked a migrant across the border and asked for him to be admitted to the United States because he had “cognitive disabilities.” The request was rejected because Border Patrol officials determined that the “cognitive disabilities” were diagnosed by an Escobar aide, rather than a certified professional. The claim about the disability was recorded on a form bearing Escobar’s congressional letterhead.

“Management saw that form and was like, ‘What is this?’ and reached out to our International Liaison Unit. And ILU said, ‘Yes, Veronica Escobar and several other politicians are in Mexico trying to defeat the MPP program,'” a union official said.

Former immigration judge Mark Metcalf told the Examiner that Escobar’s work in Mexico is likely a “stunt” to show that some migrants have been wrongly made to stay in Mexico as they await the resolution of their claims. But Metcalf noted that it would be a crime if Escobar’s staff injected false statements during interviews with migrants and in paperwork submitted to immigration officials.

“She’s trying to obviously say these people have been wrongly denied their claims and they’re waiting when they shouldn’t be,” Metcalf said.