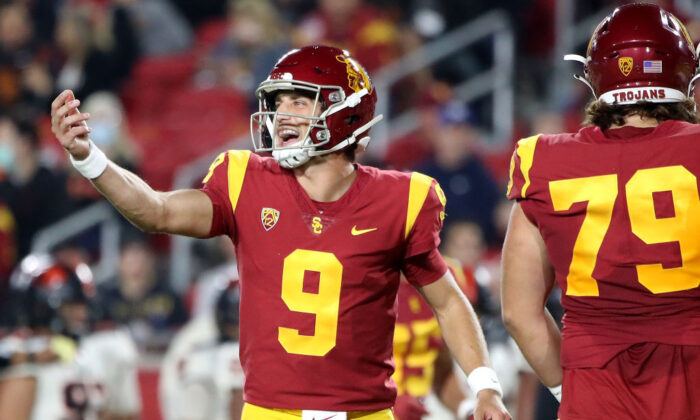 Kedon Slovis #9 of the USC Trojans calls out a play during the first quarter against the Oregon State Beavers at Los Angeles Memorial Coliseum in Los Angeles on Sept. 25, 2021. (Katelyn Mulcahy/Getty Images)
Southern California

LOS ANGELES—Several USC football players will deliver food left over from this weekend’s game to homeless people on Skid Row on Sept. 26, coinciding with the Trojans’ annual Zero Waste Game.

The effort will be led by injured quarterback Mo Hasan, the founder and operator of the nonprofit organization Second Spoon, which regularly distributes extra food, usually from the student-athletes’ training table, to homeless people.

Hasan was among the 22 players selected for the Allstate American Football Coaches Association Good Works Team announced Friday for their commitment to community service.

The players on the Good Works Team, and their non-profits of choice, will benefit from a $1 million contribution from Allstate, as permitted by the new NCAA Name Image Likeness legislation.

Hasan transferred to USC in 2020 after playing the 2018 and 2019 seasons at Vanderbilt. He was sidelined most of the 2020 season with a leg injury and did not play.

Hasan was set to compete to be the Trojans’ backup quarterback this season, but tore knee ligaments in spring practice and will be sidelined for the season.

Hasan received his bachelor’s degree in economics and history from Vanderbilt in 2020 and is working on a master’s degree in entrepreneurship and innovation at USC.

USC conducted its annual Zero Waste Game at Saturday night’s 45-27 loss to Oregon State at the Los Angeles Memorial Coliseum, competing with other Pac-12 Conference universities to divert waste from landfills to recycling or composting.

The game was part of the Pac-12’s Zero Waste Challenge, a competition at a selected football and men’s basketball game to determine which member university diverted the most waste from landfills, as well as which used the most innovative methods to expand the reach and impact of sustainability education efforts.

“Zero waste” is defined as diverting 90 percent or more of waste materials from the landfill or incinerator, through recycling, composting or other repurposing.