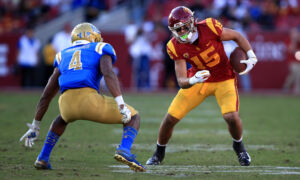 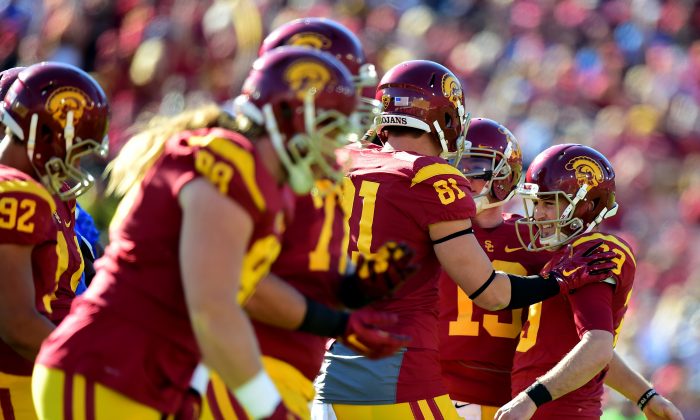 LOS ANGELES—University of Southern California (USC) football coach Clay Helton was fired today, with university Athletic Director Mike Bohn calling him “one of the finest human beings I have met in the industry” but saying he believes the team will have a greater chance of success this season under new leadership.

The firing comes two days after the then-15th-ranked Trojans suffered a 42-28 loss to unranked Stanford in front of a stunned crowd at Los Angeles Memorial Coliseum.

Bohn said associate head coach Donte Williams will lead the team for the rest of the season.

“This season is just getting started and we have the opportunity to really do something special with this team and this program,” Bohn said.

“Donte is an experienced and well-respected coach who is renowned for his ability to develop relationships with student-athletes, and I appreciate his willingness to take on this challenge.

“We still have control of our own destiny in the Pac-12 Conference, a tremendously talented group of student-athletes, and complete faith in the phenomenal assistant coaches and outstanding support staff in the John McKay Center.”

Bohn said a national search will be conducted for a new coach. Williams will make his debut as interim coach Saturday when the Trojans (1-1) play at Washington State (1-1).

In a statement released on social media, Helton called being USC’s coach, “the opportunity of a lifetime” and wrote that he was “forever indebted” to his players “for what you have given me.”

“The relationships that we have built and the memories that we have made will be with us forever,” Helton wrote. “I am so appreciative for all of the hard work that our current staff and student-athletes have put into preparing for this season, and while it will be hard to not be in the fight with you, I am confident that great things lie ahead.

“As you compete for a championship, no one will be cheering louder than the Helton family.”

Helton had a 46-24 record as USC’s coach, leading Trojans to a 52-49 victory over Penn State in the Jan. 2, 2017, Rose Bowl in a season USC finished second in the Pac-12 South Division but was the conference’s representative in the Rose Bowl because Washington was selected to play in the College Football Playoff.

Helton coached USC to the Pac-12 championship in 2017—the Trojans’ lone conference title since 2008—but lost to Ohio State 24-7 in the Cotton Bowl. USC won three Pac-12 South division titles during his tenure.

“Clay is one of the finest human beings I have met in this industry, and he has been a tremendous role model and mentor to our young men,” Bohn said. “We appreciate his many years of service to our university and wish him nothing but the very best. Consistent with our values as an institution, he deserves the utmost respect from the Trojan Family during this transition.

“As I committed to upon my arrival at USC, during the past two off-seasons we provided every resource necessary for our football program to compete for championships,” Bohn said. “The added resources carried significantly increased expectations for our team’s performance, and it is
already evident that, despite the enhancements, those expectations would not be met without a change in leadership.”

“This decision represents our next step toward that goal in what has been a thoughtful and strategic process to build a comprehensive football organization equivalent to the premier programs in the modern landscape,” Bohn said.

“I accept the enormous responsibility I have to our current and former players and the entire Trojan Family to live up to our incredible heritage.”