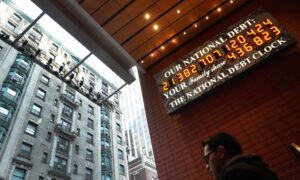 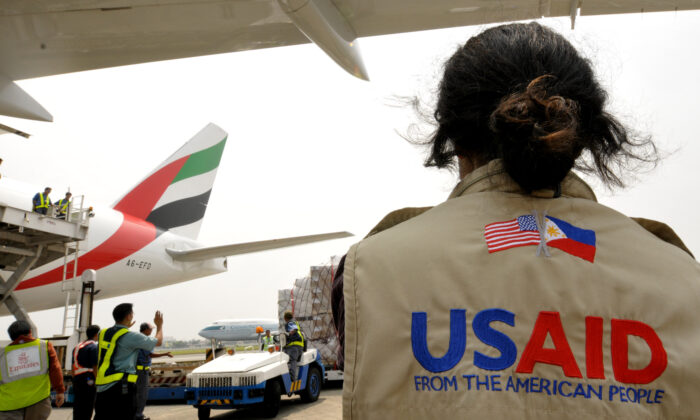 A US AID worker watches as relief supplies are unloaded at Manila's international airport on Oct. 13, 2009. (Jay Directo/AFP via Getty Images)
US News

Mark Moyar looked forward to joining the U.S. Agency for International Development (USAID) as President Donald Trump’s appointee and making government more honest and efficient, but he never dreamed that doing so would cost him his job and possibly even his career.

From February 2018 to August 2019, he worked as director of USAID’s Office of Civilian-Military Cooperation, during which he reported multiple individuals for several months of waste, fraud, and abuses.

Instead of receiving protection, Moyar faced allegations of disclosing classified information, a security clearance suspension, and termination. Moyar explained in a letter to Congress that he believes he was also denied due process after being forced out.

In a letter to members of Congress, Moyar explained that he has been struggling to find employment due to his sudden termination and security clearance suspension, and worrying that his “financial situation will have gone from bad to terrible.”

Through a congressional source, The Epoch Times obtained a copy of correspondence and documents relating to the case.

According to the documents, USAID’s decision to suspend Moyar’s security clearance stemmed from allegations made in June 2019 by an unidentified individual from the Pentagon, who claimed that Moyar’s book, “Oppose Any Foe: The Rise of America’s Special Operations Forces,” contained classified information.

Published in 2017, the book covers the rise of the United States Special Operations Forces and their role in U.S. security efforts against external threats. The book is currently still on the Central Intelligence Agency’s book list for studies in intelligence.

Moyar argued in his sworn statement to USAID that his book was academic in nature and based on public information.

Documents obtained from Congress detail the situation surrounding the book’s publication. On April 10, 2016, Moyar had contacted the Defense Department’s (DOD) Office of Prepublication and Security Review (DOPSR) to submit his book manuscript for prepublication review. He received a confirmation a few days later that his materials were received.

According to DOPSR guidelines for prepublication review, books and manuscripts must “be submitted to DOPSR at least 30 working days before the date needed and before submission to a publisher.” After submitting his materials, Moyar was in contact with DOPSR and had allotted 145 working days for the DOPSR to approve his book manuscript.

Over the course of four months, DOPSR continued to delay its review of the book manuscript, informing Moyar that they had yet to complete their review and couldn’t provide clearance.

DOPSR eventually wrote to Moyar that “we cannot prohibit you from publishing prior to us completing our review,” but if the book contains classified information, the author would have liabilities.

Because DOPSR, which ended communication with Moyar after November 2016, didn’t object to the contents of the book manuscript and was given more than the required 60 days for prepublication reviews, Moyar and his publisher decided to proceed with publication in 2017.

Moyar argued in his sworn statement that he believes, “If DoD had genuine concerns, they would be obligated to convey those concerns rapidly to my publisher and me if they believed it necessary to prevent a harmful disclosure.”

The DOD’s allegations regarding the book, which came two years after the book’s publication and during Moyar’s appointment to USAID, sparked the USAID’s decision to suspend Moyar’s security clearance.

In September 2019, Moyar submitted a whistleblower retaliation complaint to the USAID Office of Inspector General, calling Voorhees’s decision an instance of the “double standards of the Deep State.”

Moyar explained in USAID-related correspondence he sent to Congress that he believes his termination and security clearance suspension were in retaliation from people he reported for fraud, waste, and abuse during his appointment at USAID.

Although political appointees, such as Moyar, aren’t covered by the Whistleblower Protection Act, they are protected by the Presidential Personnel Directive 19 (PPD-19). According to PPD-19, U.S. government officials are prohibited from taking or threatening to take “any action affecting an employee’s Eligibility for Access to Classified Information as a reprisal for a Protected Disclosure.”

USAID Inspector General Ann Calvaresi Barr agreed to lead an investigation regarding Moyar’s complaint, and on Dec. 19, 2019, Barr’s office provided Moyar a copy of the investigation report, which denied him protection under PPD-19.

Moyar expressed in his letter to Congress that the report was a “remarkably inaccurate, shallow, and biased document.”

As such, the USAID Office of Inspector General sent him a notice on Jan. 10, stating that the agency didn’t commit any wrongdoing and stands by its decision to terminate him.

Currently, Moyar is planning to submit an appeal to the Intelligence Community Inspector General (ICIG) sometime in February. The ICIG can decide whether to hear the appeal. If heard, the appeal would require a six-month investigation.

Additionally, the USAID administrator, who has the authority to reverse decisions, can choose to reverse Moyar’s termination and security clearance suspension.

In his letter, Moyar urged Congress members to “contact USAID leadership, the White House, the Department of Justice, and anyone else who might be able to help rectify this matter.”

USAID’s Office of Inspector General declined to comment to The Epoch Times about the case; the agency’s Office of Security didn’t respond to a request for comment.