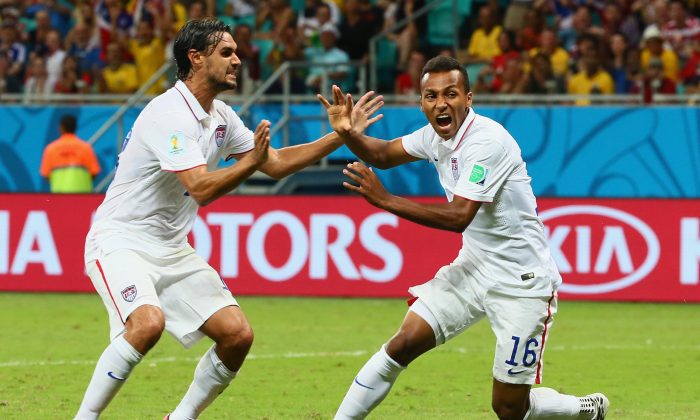 Julian Green of the United States (R) celebrates scoring his team's first goal in extra time with Chris Wondolowski during the 2014 FIFA World Cup Brazil Round of 16 match between Belgium and the United States at Arena Fonte Nova on July 1, 2014 in Salvador, Brazil. (Kevin C. Cox/Getty Images)
Soccer

Tim Howard pulled out more than a dozen saves during normal time to keep the USMNT in the match.

However, USA were undone in extra time, as Kevin de Bruyne and Romelu Lukaku managed to beat the splendid Howard.

Julian Green pulled a goal back for USA shortly after coming on as a substitute, but Belgium managed to hold firm and see out the match without any further incident.

See the highlights below.

Tim Howard has made numerous saves for USMNT today. Check out his saves here.

Romelu Lukaku scored in the 114th minute of the game.

Julian Green pulled one back for USA in extra time.

US World Cup Ends With 2-1 OT Loss to Belgium

SALVADOR, Brazil (AP) — They captured the eyes and hearts of a suddenly awakened soccer nation, who gathered in unprecedented numbers to watch the world’s game.

But the end of the ride came at the exact same point as four years ago: with an overtime loss in the World Cup’s round of 16.

Kevin De Bruyne finally beat goalkeeper Tim Howard in the third minute of extra time, Romelu Lukaku scored 12 minutes later to give Belgium a two-goal lead, and the Red Devils hung on for a 2-1 victory Tuesday.

“It’s heartbreaking,” Howard said. “I don’t think we could have given it more.”

Before exiting, the U.S. showed the spunk that captured America’s attention. Julian Green, at 19 the youngest player on the U.S. roster, stuck out his right foot to volley in Michael Bradley’s pass over the defense in the 107th minute, two minutes after entering the game.

They nearly tied it up in the 114th, when Clint Dempsey peeled off the ball and was stopped point-blank by goalkeeper Thibaut Courtois after being fed by Bradley on a free kick.

But it wasn’t enough, and U.S. players fell to the field at the final whistle in their all-white uniforms like so many crumpled tissues.

“You get to this point and these games are always about a play here and play there,” Bradley said.

The Americans advanced from a difficult first-round group that included Germany, Portugal and Ghana to reach the knockout rounds of consecutive World Cups for the first time. Four years ago, they were eliminated in South Africa by Ghana 1-0 on a goal in the third minute of overtime.

Fans who had made the trek south of the equator chanting “I believe that we will win!” could hardly believe they lost, extending a World Cup winless streak against European nations to nine games over 12 years.

The crowd of 51,227 at Arena Fonte Nova appeared to be about one third pro-U.S., with 10 percent backing the Belgians and the rest neutral. Back home, millions watched across the United States in offices, homes and public gatherings that includes a huge crowd in Chicago’s Soldier Field.

At some large financial firms in Manhattan, 70-inch screens were brought in for employees to watch. President Barack Obama joined about 200 staffers in an Executive Office Building auditorium to watch the second half.

“I believe!” he exclaimed as he walked in at the front of the hall. “I believe!”

That sparked a chorus of the chant, and as Obama took a front-row seat, he said sheepishly: “I was worried that if I walked in and Belgium scored, I’d get in trouble.”

Howard, playing the finest game of his career, stopped a dozen shots with his legs and arms to keep the Americans even through regulation and force an additional 30 minutes. He wound up with 16 saves.

In its first World Cup under Jurgen Klinsmann, the U.S. had promised to play attacking soccer. But once again the Americans had trouble maintaining possession and for much of the night it seemed as if the field were tilted.

Howard, at 35 one of the American veterans, kept saving his team.

But when Matt Besler lost his balance on an attack down the right, Lukaku sped in alone and crossed in front of the goal. The ball rebounded off a defender, and De Bruyne controlled it, spun and beat Howard just over his right foot.

Then with the U.S. pushing for an equalizer, De Bruyne burst ahead and fed Lukaku. He slotted the ball past Howard, his Everton teammate, seeming to put the Red Devils out of reach.

But Green, among five German-Americans on the U.S. roster and a surprise pick, woke up the team and its fans with his first touch of the game, setting off raucous chants of “U-S-A! U-S-A!” But there would be no final comeback this time.

Chris Wondolowski had a chance to win it in stoppage time when Jermaine Jones flicked the ball to him at the top of the 6-yard box, but with Courtois coming out Wondolowski put the ball over the crossbar.

“The dream falls short, but this is an incredible group,” Howard said, “and we’ll never forget this night.”