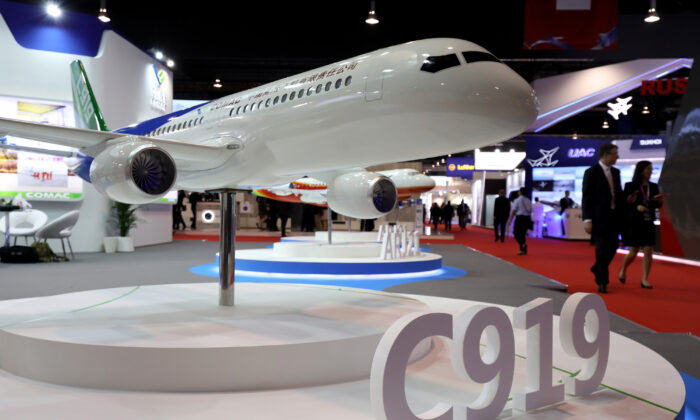 A model of the Commercial Aircraft Corp. of China Ltd. (Comac) C919 aircraft sits on display at the Singapore Airshow held at the Changi Exhibition Center in Singapore, on Feb. 6, 2018. The state-owned Chinese company seeks to chase markets in Asia and Africa. (Seong Joon Cho/Bloomberg via Getty Images)
Thinking About China

It’s a source of constant puzzlement and even growing anger that the United States–both the federal government and industry—continues to help the Chinese regime build up its high-tech sectors. The United States knows full well that China treats it as an adversary. Yet we continue to sell the rope with which to hang ourselves.

Case in point: As China struggles to build a globally competitive commercial airliner industry—and “struggles” is the operative word here—the United States (and other Western countries) have been happy to help out. The Chinese currently have two passenger jets under development: the 100-seat ARJ21 and the 170-seat C919. Both of these planes rely overwhelmingly on Western systems, subsystems, and technologies. General Electric supplies the engines, Rockwell Collins the avionics, and Goodrich and Liebherr (a German-Swiss company) the landing gear.

In fact, it’s estimated that only 25 percent of the overall value of C919 is actually Chinese, mostly in the manufacture of the fuselage and wings, as well as final assembly.

So why is the West, particularly the United States, helping to create an industry that could undercut U.S. passenger jet sales? It’s a mystery.

The same is happening in the semiconductor business. There exists a huge gap between current Chinese chip technology and global state-of-the-art chips.

In particular, China has been unable to design and fabricate high-end microchips, particularly when it comes to breaking the “seven-nanometer wall,” that is, producing semiconductors with process nodes below seven nanometers.

China aims to produce 70 percent of its own chips by 2025, but it’s unlikely to meet that target. In fact, China can barely supply more than 15 percent of the semiconductors it needs.

As a result, Beijing depends heavily on foreign sources for its microchips and chip-manufacturing technology. In 2020 alone, China imported more than $300 billion worth of semiconductors, more than it spent on buying foreign oil.

Beijing’s inability to manufacture high-end chips threatens to leave it unable to participate in the so-called fourth industrial revolution. According to Mathieu Duchatel, director of the Asia Program at Institut Montaigne, without an advanced semiconductor sector, China will find it difficult to “dominate the digital revolution” enabled by artificial intelligence, big data, cloud computing, 5G wireless infrastructures, and quantum computing.

So China faces another hurdle in its effort to become a technological superpower, perhaps an insurmountable one. Again, however, the United States is—perplexingly—helping China close the gap.

A recent report in The Wall Street Journal shows that the U.S. Commerce Department has approved almost all requests for U.S. tech exports to China. These included semiconductors, aerospace components, and technology related to artificial intelligence, among other items.

The Journal noted that less than half of all U.S. exports to China, totaling roughly $125 billion, even required an export license. Moreover, when a license was required, the Commerce Department approved the vast majority of requests. In 2020, 94 percent of all applications were approved, and in 2021, this dipped only slightly to 88 percent.

This is despite the fact that the United States has supposedly clamped down on high-tech exports to China in recent years. The Trump administration, for example, placed trade restrictions on several high-tech Chinese companies, including Huawei and ZTE. The Biden administration has expanded on this hardline approach, blacklisting seven Chinese companies, in part to keep companies from exporting advanced semiconductors to China.

Therefore, it’s maddening that the export of advanced technologies and high-tech components to China keeps finding exceptions. For example, despite apparent export controls, U.S. exports of semiconductor manufacturing equipment rose from $2.5 billion in 2017 to almost $7 billion in 2021.

Even former President Donald Trump seemed to waver at times when it came to being tough on high-tech exports to China, denouncing his own administration’s efforts to restrict the sale of high-performance jet engines (for use in the Chinese C919 airliner) and other items, such as semiconductors. He called such constraints “a fake term of national security” and later wrote on Twitter that he wanted to make it easier “to do business with the United States, not [more] difficult.”

As a result, the United States continues to send an array of advanced technologies to China that could help the country modernize its armed forces. More than ever, cutting-edge technologies—particularly those in the information, telecommunications, and computing sectors—have the potential to significantly upscale military capabilities for tasks such as surveillance, intelligence, targeting, and even empowering autonomous systems (such as armed drones).

Moreover, these technologies are mostly embedded in the commercial sector: semiconductors, advanced computing and software, and the like. Artificial intelligence—increasingly seen as a potential game-changer in future warfare—is almost entirely being developed in the civilian research and development base.

As a result, these technologies tend to flow more freely than strictly military technologies. Yet the impact of such technologies could be profound—even apocalyptic—for the United States, should its adversaries perfect military uses. And through the use of military-civil fusion, China is well on the way toward doing just that.

Therefore, it makes no sense that the United States would be aiding in undermining its security.