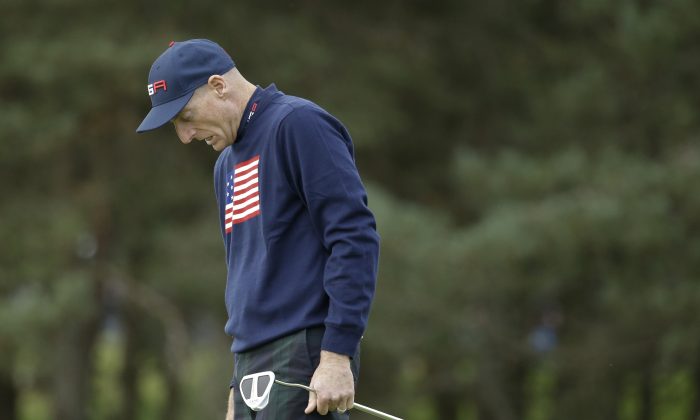 Jim Furyk of the US misses his putt on the 13th green during the foursomes match on the second day of the Ryder Cup golf tournament at Gleneagles, Scotland, Saturday, Sept. 27, 2014. (AP Photo/Matt Dunham)
Golf

AUCHTERARDER, Scotland—Hard to imagine but the script from Day 2 at The Ryder Cup Matches simply repeated itself from Day One. The Americans fought gamely in the morning four-ball matches drawing to within one point—6 1/2 to 5 1/2. That was as close as they would come. Once again Team Euro mounted a major counterattack—capturing 3 1/2 of the 4 available points and putting themselves in a very commanding 10-6 lead with 12 singles matches to be played Sunday. For the European team to retain the Cup they need only secure 4 of the 12 points up for grabs in the singles competition. The road for the USA is indeed a long one—needing no less than 8 1/2 points—more difficult than their epic come from behind in 1999 at The Country Club because this time it will have to occur on the road and against a more formidable European team.

The American side came out Saturday morning ready to demonstrate a strong resolve—claiming 2 1/2 of 4 available points and narrowing the European lead to a single point. American Captain Tom Watson made a bold move in not having either Phil Mickelson or Keegan Bradley play at all. Watson also was determined not to keep Patrick Reed and Jordan Spieth on the afternoon sidelines as he did on the first day of the matches. None of it much mattered as the European team claimed three of four wins in the foursomes.

For most Americans the format of foursomes is a rather strange one—more so because so few people in the States actually engage in it. The format calls for players to alternate teeing off between the odd and even holes. After one player tees off the other player follows and they alternate accordingly until the hole is completed. The format is quite rigorous because it mandates that players have some sort of consistency in order to maximize their low score potential. The format is played by numerous clubs throughout the United Kingdom and Ireland and the success demonstrated at this year’s Ryder Cup has been quite emphatic—winning seven of the eight total points in the format.

Sunday’s single matches have generally been to the American advantage but in the most recent of matches that historical advantage has plummeted to near parity.

USA Captain Watson opted to go with his youngest team members in the first three positions—Spieth, Reed and Rickie Fowler. They will have their hands full with the likes of Graeme McDowell, Hernik Stenson and the world number one player Rory McIlroy respectively. Euro Captain Paul McGinley is banking on the strength of his opening trio to practically end the matches with decisive victories. The match between McIlroy and Fowler will once again place these two young stars in direct competition as they have done so in earlier encounters at The Open Championship and the PGA Championship earlier this year.

Jim Furyk and Sergio Garcia will meet in a rematch from their tussle at Medinah two years ago which the Spaniard won.

A four-point deficit is the equivalent of being four touchdowns behind in a NFL game. Every conceivable break and fortuitous bounce will need to go Team USA’s way and the odds on that happening are indeed long and nearly remote.

What the European team has shown is a depth of talent and wherewithal not to panic from what the AM matches on both days produced.

Ryder Cup single matches is golf’s most compelling and most stress-oriented encounter. The nerves will be at their rawest—butterflies will indeed be churning. The matches have not concluded but it will take an American side fully capable in pushing ahead when few believe it is possible.

Both Captains are fully aware of what momentum can do to either side. For McGinley he has frontloaded his line-up with some of this best players—he wants to make sure that not even a flicker of momentum tilts towards the USA side. For Watson he is going with the best cards he can likely offer—young hands who are not shell-shocked from past Ryder Cups—eager to see what they can do in a cauldron of pressure like no other in golf. The final chapter waits to be written.