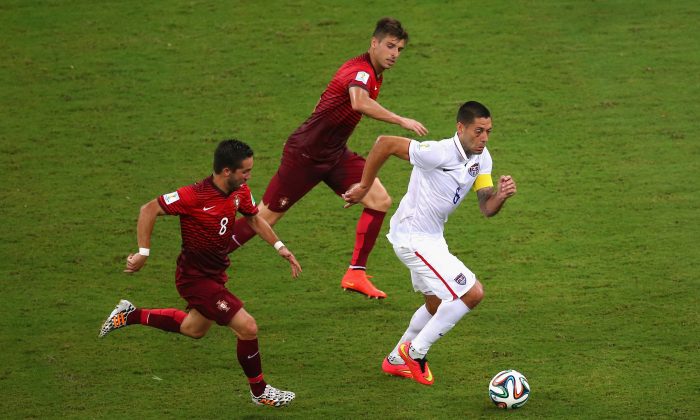 Clint Dempsey of the United States controls the ball against Joao Moutinho of Portugal during the 2014 FIFA World Cup Brazil Group G match between the United States and Portugal at Arena Amazonia on June 22, 2014 in Manaus, Brazil. (Photo by Elsa/Getty Images)
Soccer

A very unusual water break happened during the first half of the USA-Portugal World Cup match on Sunday, June 22.

The break happened at the 40th minute.

The referee called a stop to the game, whcih is being played in Manaus, which is in the Amazon rainforest.

According to ESPN, which is broadcasting the game, says that if the temperature is over 89.6 Fahrenheit then the referee can call a stoppage at 30 minutes and 75 minutes.

The break can be up to three minutes in length.

Apparently the rule is flexible because the stoppage was at the 40 minute mark.

“The fact of the matter is, it could be dangerous playing in Amazon type humidity,” said one announcer.

“Yeah, what was the total break–like 30 seconds?” added another. “It’s a no-brainer to me.”

Portugal is up 1-0 in the close match, after Nani scored early on.

If Portugal loses it is eliminated.

See an Associated Press preview from before the game below.

Ronaldo plays for Portugal against US at World Cup

MANAUS, Brazil—Cristiano Ronaldo will start for Portugal against the United States on Sunday in a crucial Group G match at the World Cup.

Ronaldo, who has been hampered by a left knee injury, has been training regularly with the team but wearing some wrapping just below his knee.

Portugal will be without usual starters Fabio Coentrao and Hugo Almeida, who are both injured and out of the World Cup. Pepe is suspended.

The United States will play Graham Zusi in a five-man midfield with Jozy Altidore out injured. Clint Dempsey will be the lone striker.

The U.S. would advance to the second round with a victory.