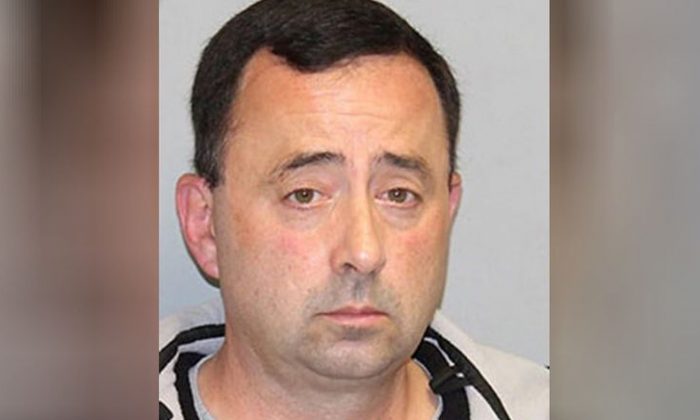 A federal judge on Thursday sentenced Larry Nassar, the former USA Gymnastics team doctor accused of sexually assaulting gymnasts, to 60 years in prison on federal child pornography charges that grew out of a sex abuse investigation.

U.S. District Judge Janet Neff in Grand Rapids, Michigan handed down the sentences that were sought by prosecutors, and she called him a threat to children.

“It’s imperative Mr. Nassar be deterred as long as possible,” Neff said, ESPN reported. “Mr. Nassar was, is and, in my view, will continue to be a danger to children. He has demonstrated that he should never again have access to children.”

Nassar, 54, pleaded guilty in July to possessing thousands of images and videos of child pornography between 2003 and 2016. He also pleaded guilty on charges of trying to destroyed evidence.

Nassar is also set to be sentenced in January in two Michigan courts after pleading guilty to additional counts of criminal sexual conduct related to allegations he assaulted girls under the guise of medical treatment.

According to ESPN, FBI agents found 37,000 illegal pornographic images on a hard drive in a trash bin when they searched Nassar’s home.

Nassar was the team physician for the Michigan State University gymnastics and women’s crew teams, as well as an associate professor at MSU’s College of Osteopathic Medicine. He served as the USA Gymnastics physician through four Olympic Games.

“He abused my trust, he abused my body and he left scars on my psyche that may never go away,” Olympic gold medalist McKayla Maroney said in a victim statement submitted to Neff and published online.
“It started when I was 13 years old, at one of my first national team training camps, in Texas, and it didn’t end until I left the sport,” Maroney wrote, ESPN reported. “Because the national team training camps did not allow parents to be present, my mom and dad were unable to observe what Nassar was doing.
U.S. Olympic gymnast Aly Raisman also filed a complaint.
“Soon after Larry pleaded guilty to federal child pornography charges, I was informed that I could submit a Victim Impact Statement to the court for sentencing consideration. If I wanted, I could also request to read the statement in court on the day of sentencing,” Raisman wrote in the Player’s Tribune. “Deciding to write the letter was a relatively easy decision. Deciding to read it in court, in front of Larry, was not easy.”
Nassar’s attorneys had asked the federal judge for leniency in court filings, arguing Nassar had helped fellow inmates and taken Bible classes since his arrest nearly a year ago, the State Journal said.
Reuters contributed to this report.