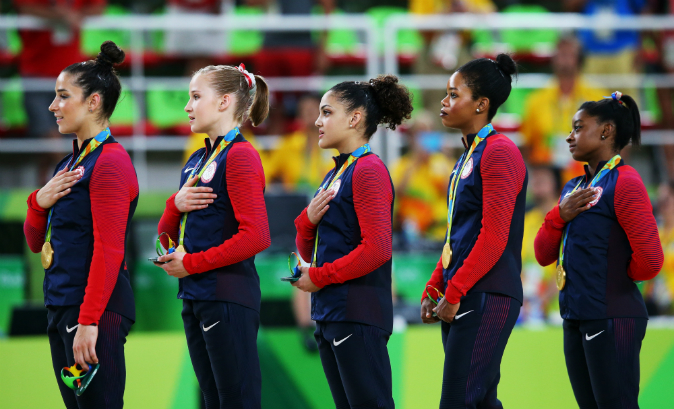 (L to R) Gold medalists Alexandra Raisman, Madison Kocian, Lauren Hernandez, Gabrielle Douglas and Simone Biles of the United States pose for photographs with their medals after the medal ceremony for the Artistic Gymnastics Women's Team on Day 4 of the Rio 2016 Olympic Games at the Rio Olympic Arena in Rio de Janeiro, Brazil on August 9, 2016. (Laurence Griffiths/Getty Images)
By Reuters

The ban of one of USA Gymnastics’ more high-profile coaches takes effect immediately and will be followed by two additional years of suspension.

The decision to suspend Haney, a longtime coach of 2016 Rio Olympic gold medalist Laurie Hernandez, was made by a three-member independent hearing panel, followed by a Safe Sport hearing panel.

“The independent hearing panel—comprised of three members of the gymnastics community, including an attorney, a club owner, and a former national team athlete—found that Ms. Haney violated the USA Gymnastics Code of Ethical Conduct, Safe Sport Policy, and other policies,” USA Gymnastics said in a statement.

Haney, who until recently coached 2018 world champion Riley McCusker, was placed on interim suspension in January pending the outcome of a hearing into allegations she berated young gymnasts and demanded some of them practice and compete while injured.

USA Gymnastics is still reeling from the sexual abuse scandal that involved former team doctor Larry Nassar, who was sentenced to up to 300 years in prison in 2017 after more than 350 women testified about abuse at his hands.