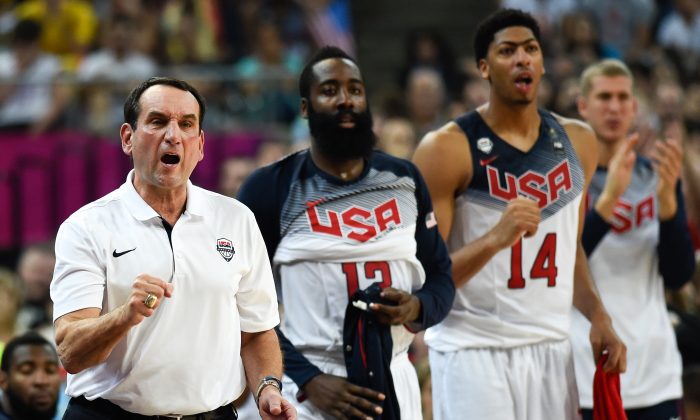 The United States beat Lithuania in the FIBA World Cup semifinals on Thursday.

The team will now advance to the final to face the winner of France and Serbia. The other semifinal will take place on Friday.

The United States kept Lithuania at bay throughout the first half before breaking away in the third quarter with a huge run.

Kyrie Irving led the United States with 18 points on 8/15 shooting, while James Harden and Klay Thompson each had 16.

Mindaugas Kuzminskas and Valanciunas led Lithuania with 15 points each.

Check out live score updates and video highlights below, as well as final box scores and some pictures.

Next up for @USABasketball… vs. the winner of #FRAvSRB (Friday) in the @FIBA #Spain2014 Championship on Sunday! pic.twitter.com/vodH9Njs5n

–The teams trade buckets through the first couple minutes with the game clearly over–another win in the United States’ long winning streak against Lithuania. Most of the U.S. starters are off the floor. 80-56 with 6:39 left.

Spain is gone and their old friends from America are celebrating by unleashing their best ball of the tournament. Quality foe getting routed

A look at @USABasketball‘s dominance in the @FIBA Basketball World Cup as they lead by 28 late on @ESPN. #Spain2014 pic.twitter.com/3CsaHq6Rbf

–Valanciunas valiantly keeps playing hard, as does the rest of the team, but the United States’ lead stays at around the 30 mark. The lead is at 94-65 with 2:10 left.

–Curry hits a basket early in the quarter after spending most of the first half on the bench in foul trouble. Harden hits two buckets, and Davis hits one to quickly put the lead at 53-35 with 8:07 left in the quarter.

–The lead is extended even more as Harden makes another bucket and Klay Thompson hits two. Lithuania has only scored two points in the half.

Harden’s 3PT gives @USABasketball a 10-0 run out of halftime to push the lead to 53-35 vs LITHUANIA on @ESPN! pic.twitter.com/lTKqHOgX5w

The @KyrieIrving alley-oop to @AntDavis23 caps an 18-2 run to start the 3rd for @usabasketball. pic.twitter.com/2xnNAOC4O7

–Lithuania starts to narrow down the lead, with buckets from several players. But the comeback is derailed by an unsportsmanlike foul on Donatas Motiejunas. James Harden makes two free throws, then a 3-pointer. 68-43 in the United States’ favor with 2:37 left in the half.

–Valanciunas hits two free throws but the U.S. keeps coming with more baskets. Ksisof Lavrinovic does put in another to stem the tide, then a free throw. 76-49 at the end of the third quarter.

STATS: Klay Thompson and James Harden lead the U.S. with 16 points. Stephen Curry has 10, and Faried and Irving have 7 each. Rudy Gay has 7 rebounds while Klay Thompson has 3 assists.

STATS: Mindaugas Kuzminskas continues to lead Lithuania with 12 points but scored 0 in the quarter. Adas Juskevicius has 10 points while Darjus Lavrinovic has 9. Kuzminskas and Valanciunas each have 7 rebounds. No player had more than 2 assists.