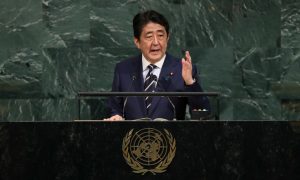 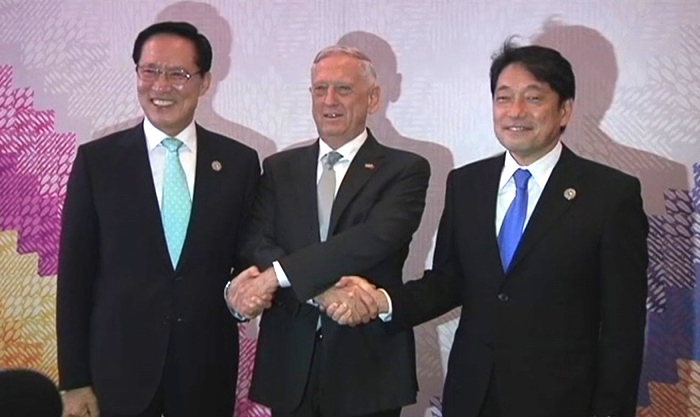 U.S. President Donald Trump said on July 19 that he would help resolve tensions between South Korea and Japan if asked. Previously, a Japanese media outlet quoted a U.S. official as saying that Washington is worried that the conflict between Japan and South Korea may play into the hands of China and North Korea.

The trade row between the two neighboring countries stems from a South Korean court decision ordering Japanese companies to compensate victims of forced labor during Japan’s colonial rule of the Korean Peninsula between 1910 and 1945.

South Korea’s attorney in the case announced on July 16 that if Japanese companies, such as Mitsubishi Heavy Industries, did not respond to the compensation verdict, South Korea would seize their mortgaged assets to compensate the victims.

“Fundamentally ROK [the Republic of Korea] and Japan must resolve the sensitive matters and we hope that the resolution happens soon,” Stilwell said. “The United States is a close friend and ally to both. We will do what we can to support their efforts to resolve this.”

Following President Trump’s July 19 comments that he would help resolve tensions between the two countries if their state leaders needed him to do so, National Security Adviser John Bolton left for Japan and South Korea on July 20.

Tensions in the Asia-Pacific

Tensions in the area have been high for years, with North Korea being a constant flashpoint and China claiming sovereignty over scores of uninhabited islands.

Japanese media outlet Toyo Keizai Online published an article on July 17 titled, “China must be secretly overjoyed as Japan-South Korea relationship worsens.” It quoted a U.S. official as saying that Japan and South Korea both face “domestic pressures that would not allow concessions,” and that China and North Korea “must be happy to see the dissolution of cooperation between Japan and South Korea, which previously served to strengthen safeguards in the Asia-Pacific.”

This official also hinted that the United States would soon get involved in helping to mediate disputes between the two countries.

In addition, the majority of those polled believe that South Korea’s demands and policies toward Japan—such as seeking compensation for victims of forced labor, the dissolution of the “Comfort Women” foundation, and a South Korean destroyer directing fire-control radar at Japanese fighters—are going to an extreme and have seriously damaged relations between the two countries.

According to these two Japanese media, as July 21 was an election date for Japanese House of Councillors, Abe would likely stick to tough policies toward South Korea in order to win the election.

On the other hand, South Korean President Moon Jae-in has been facing criticism from both the opposition party and the public, following the failure of his diplomatic policies with North Korea. Moon’s recent nationalist measures against Japan have helped him regain approval ratings significantly.

According to a July 18 report by JoongAng Ilbo, one of the three biggest newspapers in South Korea, Moon’s approval rating has been restored to over 50 percent after he showed a strong stance when responding to Japan’s export restrictions.

Regarding possible U.S. mediation involvement, the Toyo Keizai Online report quoted a Japanese foreign affairs official as saying that, “Even if the Americans make great efforts at mediation, it’s expected that there will be no immediate results, as it takes time to resolve the historic conflicts between the two countries.”

At the same time, however, this official stressed that U.S. mediation might at least “prevent the situation from further deteriorating.” He explained that Moon very much depends on the United States to solve the troubles with North Korea.

And as far as Japan goes, U.S.-Japanese trade negotiations are about to begin. Therefore, both Japan and South Korea need to pay respect to the United States.