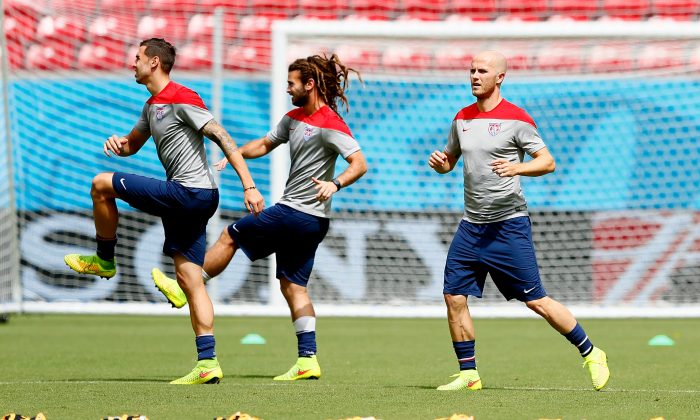 US World Cup Team Roster 2014: How Might USMNT Lineup Against Germany in Group G Today?

Although both teams need only a tie to progress to the knock-out round of the World Cup, USA coach Jurgen Klinsman and Germany coach Joachim Loew have stated that they will go for the win.

In such a scenario, how then might USA lineup against Germany?

Given the absence of Jozy Altidore via a left hamstring injury, and the lack of a backup striker, expect Klinsman to persist with playing Clint Dempsey solo upfront in a 4-2-3-1 formation.

Dempsey isn’t the ideal target man/hold-up striker-type player, but he should be able to use his mobility and good attacking sense to sniff out space in the German backline and poach a goal.

The main thrust of USA’s attack will not come from Dempsey, however.

So far in the tournament, USA’s right flank is the place where exciting teams are happening. Right-back Fabian Johnson has been a revelation so far, bombing up and down the right side with his electric pace, and providing crucial crosses into dangerous attacking areas. He combined excellently with attacking midfielder Graham Zusi against Portugal on Sunday, and provided the cross for Michael Bradley’s near-goal.

Johnson and Zusi will be licking their chops if Germany fields the same left-sided players today as they did against Ghana. Midfielder Mario Gotze is known more for his goals and through balls than defending, and Benedikt Howedes, while a solid center-back, just hasn’t cut it yet at left-back in the tournament so far.

USA might have a problem if Loew slots captain Phillip Lahm at left-back and play Bastian Schweinsteiger in the holding midfield role instead. Still, expect Johnson, Zusi, playmaker Michael Bradley, and John Brooks (the man who scored the winner against Ghana) to combine smartly and overload Germany’s left-side.

The Stars and Stripes do have to fear Germany’s top scorer Thomas Mueller and Miroslav Klose, but thus far, USA’s center-back duo Geoff Cameron and Matt Besler have put in solid performances, and they should form a tough defensive phalanx to shield goalie Tim Howard.

On the whole, expect USA to keep a tight, narrow formation defensively to exploit Germany’s own midfield narrowness (Mesut Ozil and Mario Gotze prefer to cut in rather than go wide), and use their width on the attack to break down the German defense.

Check out an Associated Press article about the match.

U.S. coach Jurgen Klinsmann was a star of the Germany team that won the last of its three World Cup titles in 1990. He also scored when the two teams last met in the group sage of a World Cup, a 2-0 victory for Germany at the 1998 tournament in France.