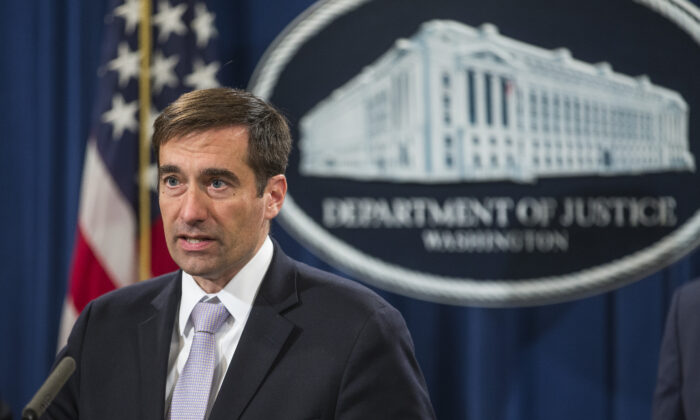 US Works to Defeat China’s Spying and Theft

WASHINGTON—China is America’s top adversary, and its ability to steal American intellectual property is an important part of that threat, but the Trump administration is developing the tools to fight back.

This was the message of two administration officials at a forum of the Homeland Security Experts Group, hosted by the Wilson Center on Jan. 17.

Echoing what is now becoming a mantra in policy and government circles, the secretary said that China “is pursuing a long-term, whole-of-nation effort to threaten and undermine the United States.”

Wolf made a concession to the economic relationship between the United States and China, however, saying, “We value our partnership with Beijing to promote global prosperity,” tacitly acknowledging the U.S.–China “phase one” trade deal that was signed at the White House just two days prior to his remarks.

But he pulled no punches in describing the threat from China.

“Using covert and overt means,” he said, “China works to threaten the U.S.’s power and dominance from within the system.”

The secretary cited Chinese efforts within academia, scientific communities, and Silicon Valley as examples in which Chinese “bad actors” must be held accountable.

The Executive Branch Strikes Back

Wolf described in general terms actions that the executive branch of the United States government is taking to counter Chinese influence.

The Department of Homeland Security (DHS) itself is using its regulatory tools and its “unique authorities, data, and missions” to block China’s efforts.

The Committee on Foreign Investment in the United States, known as CFIUS, plays a role as well.

It’s an interagency committee that includes the heads of the Department of the Treasury and the Departments of Homeland Security, Commerce, Defense, State, and Energy, as well as the offices of the U.S. Trade Representative and of Science and Technology Policy, among others.

Wolf and his CFIUS colleagues will soon have additional tools at their disposal.

Significant reforms to CFIUS are coming into effect in 2020 as a result of the Foreign Investment Risk Review Modernization Act of 2018 (FIRRMA).

The provisions of FIRRMA not only “codify certain CFIUS regulations and practices,” but the act also “expands CFIUS jurisdiction to cover several previously uncovered transactions,” according to a bulletin provided by international law firm Skadden.

Wolf described DHS operational inefficiencies he discovered when he took over the top job.

“I found each component addressing the Chinese threat in their own silo … perhaps not coordinating as much as they could across the department,” he said.

“A siloed approach is not efficient.”

Since then, new planning protocols and priorities are helping the department to identify and address threats from China “to make sure that we are positioned to respond to any threat quickly.”

Demers is in charge of the national security division of the Justice Department and leads the department’s China Initiative.

The Justice Department’s China Initiative was established in 2018 “against the background of previous findings by the Administration concerning China’s practices,” according to a department fact sheet.

“It is focused on various aspects of Chinese malign behavior, but the big thing has been economic espionage,” Demers said of the initiative.

China is “stealing everything from corn and rice technology to the BPA-free lining of your water bottle, to commercial jet airplane technology,” he said.

These days, however, although the theft of intellectual property through cyber activity is still occurring, it’s insider threats from Chinese intelligence services that are contributing to most of the cases the Justice Department has been handling over the past year and a half.

What Chinese intelligence services “do really well,” Demers said, “is get information out of people.”

He held up the Micron case as an example of the benefits to a company of contacting and cooperating with the U.S. government early on in a case of suspected insider theft of intellectual property.

Micron Technology is a leading semiconductor company that specializes in memory-storage technology.

Included in its suite of products are components for Dynamic Random-Access Memory, known as DRAM. At the time of charging the case, Micron was the only American company manufacturing DRAM.

China didn’t have DRAM, and according to the Justice Department’s announcement of the indictment on Nov. 1, 2018, the Chinese government had already identified the development of DRAM as “a national economic priority.”

The case ended up charging a Chinese state-owned company, a Taiwanese company, and three individuals with conspiracy to “steal, convey, and possess” trade secrets, and conspiracy to commit economic espionage, among other crimes.

In a nice twist for the prosecutors, the U.S. Commerce Department was then able to put the Chinese company that had stolen the technology on a Denied Entry list, Demers said.

That meant the offending Chinese company couldn’t import the tooling it needed from the United States to give them the ability to make the parts for which they stole the technology, he said.

“We are not just trying to put the thief in jail … which may not help you as a company if, in the meantime, that other company has stolen your technology and are making a product to replace it on the market,” he said.

“If we catch them early enough, we can prevent the harm from occurring.”