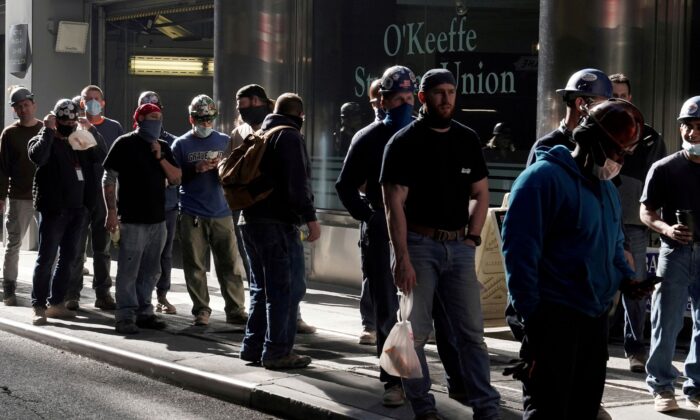 Construction workers wait in line to do a temperature test to return to the job site after lunch, amid the COVID-19 outbreak in the Manhattan borough, New York, on Nov. 10, 2020. (Carlo Allegri/Reuters)
Economy

WASHINGTON—U.S. worker productivity rebounded more than expected in the fourth quarter, curbing labor costs growth, but the coronavirus pandemic has distorted the data and prevented a clear trend.

The Labor Department said on Thursday that nonfarm productivity, which measures hourly output per worker, increased at a 6.6 percent annualized rate last quarter. Data for the third quarter was revised up to show productivity declining at a 5.0 percent rate instead of the previously reported 5.2 percent pace.

Economists polled by Reuters had expected productivity would rebound at a 3.2 percent rate. Productivity has been volatile since the pandemic started in the United States three years ago.

Hours worked rose at a 2.4 percent rate last quarter, pulling back from the 7.3 percent growth pace in the October-December period.

Last quarter’s tepid rise likely does not offer an accurate picture of labor costs for businesses.