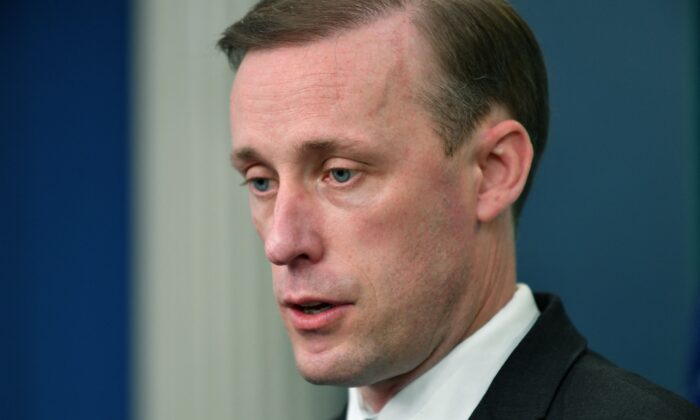 U.S. national security adviser Jake Sullivan speaks to reporters during a briefing in Washington on March 22, 2022. (Nicholas Kamm/AFP via Getty Images)
US News

US Won’t Use Chemical Weapons ‘Under Any Circumstance’: White House

The United States does not plan to use chemical weapons even if Russia uses them in Ukraine, a top U.S. official said on March 25.

“There will be a severe price if Russia uses chemical weapons,” U.S. national security adviser Jake Sullivan told reporters on Air Force One as it flew in Europe.

“I won’t go beyond that other than to say the United States has no intention of using chemical weapons, period, under any circumstance,” Sullivan added.

Biden is in Europe meeting with various officials. He landed in Poland near Ukraine on Friday to receive a briefing on how refugees are pouring into the country due to the war.

Russia invaded Ukraine on Feb. 24 and fighting has continued since then.

Before departing on the trip, Biden said there was a “real threat” that Russia would use chemical weapons against Ukraine.

The president declined to say whether U.S. intelligence suggested Putin was deploying the weapons, moving them into position, or considering their use.

“I can’t answer that. I’m not going to give you intelligence data,” he said.

Kremlin spokesman Dmitry Peskov told reporters on a call Friday that the talk from U.S. officials about Russia potentially using chemical weapons was being used as a distraction.

“It is clear that the Americans are currently trying to divert attention,” Peskov said. They speak about some ephemeral threat of deployment of chemical weapons by Russia. But this is no other than an attempt to divert attention from the scandal which has broken loose.”

NATO Secretary-General Jens Stoltenberg, in a separate briefing, claimed that Russia “is trying to create some kind of pretext accusing Ukraine, the United States and NATO allies of preparing to use chemical and biological weapons.”

“And we have seen before that this way of accusing others is actually a way to create a pretext for doing the same themselves. And of course, accusations against Ukraine and NATO allies are absolutely false,” he added.

Because of concerns about chemical weapons, NATO members in a meeting in Brussels agreed to send protective equipment to Ukraine.

Ukraine is not a member of NATO, an alliance, so Russia’s invasion has not prompted other countries to send troops to fight alongside Ukrainians.

But the United States and a slew of allies have shipped weapons and other military aid to help Ukraine defend itself against Russia, which has seen support from Belarus and other nations.