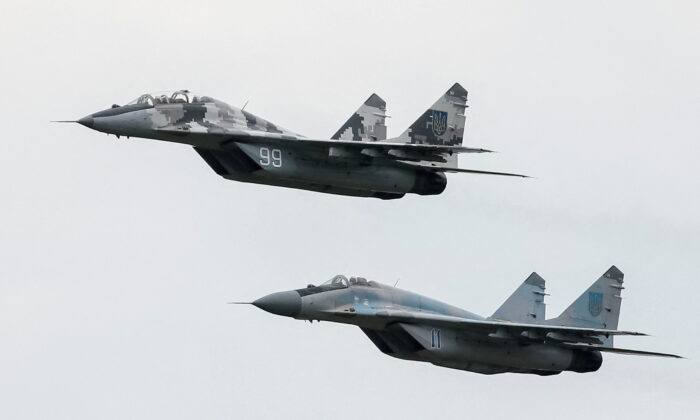 MiG-29 fighter aircraft fly at a military air base in Vasylkiv, Ukraine, in a file image. (Gleb Garanich/Reuters)
Russia-Ukraine War

The United States won’t act on a proposal from Poland to take fighter jets from the ally and transfer them to Ukraine because of concerns Russian officials would view the move as “escalatory,” a U.S. official said March 9.

“The intelligence community has assessed the transfer of MiG-29s to Ukraine may be mistaken as escalatory, and could result in significant Russian reaction that might increase the prospects of a military escalation with NATO,” John Kirby, the U.S. Department of Defense’s spokesman, told reporters in Washington.

Based on the assessment, with which Defense Secretary Lloyd Austin concurs, the military assesses the transfer as “high-risk” and will not carry it out, at least for now.

The proposal from Poland was Polish officials would transfer jets to the United States, which could then send the jets to Ukraine. Poland’s government also called on NATO allies to send jets to U.S. bases.

But U.S. officials quickly rejected the proposal, though they had not detailed the intelligence assessment until Wednesday.

Kirby also framed the decision as in Ukraine’s best interests, arguing that Ukraine would benefit more in the conflict with Russia by receiving anti-armor and air defense weapons.

While Russia’s air force has significant capabilities, air assaults have been met with resistance in the air and on the ground, according to U.S. officials.

Additionally, the Ukrainian Air Force was also said to have several squadrons of fully capable aircraft already, and a U.S. assessment concluded “giving them more is not likely” to make a big impact, according to Kirby.

Austin conveyed the position to Polish Defense Minister Mariusz Blaszczak in a call and also spoke with a top Ukraine official about similar matters.

U.S. officials had previously said Poland was welcome to transfer planes to Ukraine directly and Kirby said each nation “can decide for themselves what they want to do.”

Ukraine’s public position is that getting fighter jets would help tremendously against Russia, which invaded its neighbor on Feb. 24.

“That’s absolutely the way we see it,” Vadym Prystaiko, Ukraine’s ambassador to the United Kingdom, said on Sky News on Wednesday when asked if jets would give Ukraine the advantage it needs.

“All the tactical means you are talking about, they can be covered if we have at least not superiority, but at least control over our skies,” he added.

Ukraine prefers older jets because its pilots are trained to work with them.

The updates came hours after Mateusz Morawiecki, Poland’s prime minister, said Poland would only provide jets to Ukraine directly if all NATO members agree, as Russian officials have threatened countries that undertake such moves.