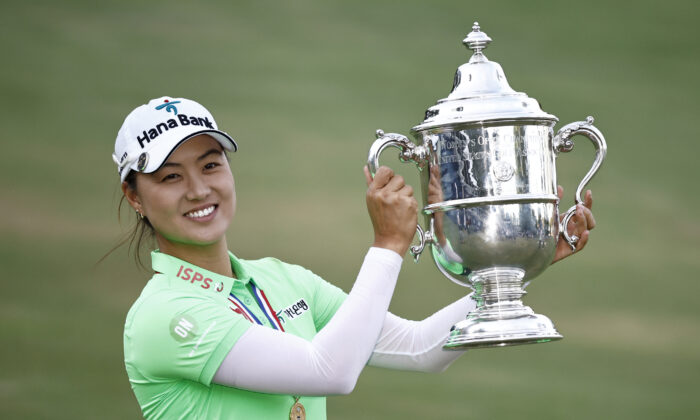 Lee, in dominating fashion, won with a four-stroke victory of –13, 271 total, over second-place American Mina Harigae.

“This is pretty special,” said the 26-year-old tour veteran Lee. “This is the one that I’ve always wanted to win since I was a little kid. So it just feels pretty amazing to be able to get it done today and I just can’t believe it.”

The always calm-looking Lee admitted, “I was pretty nervous all day.” But no one came close to catching her second-lowest score on Sunday of even-par 71—following opening rounds of 61–66–67. Lee was three strokes from tying Juli Inkster’s tournament record of 16 under in 1999 at Old Waverly.

“I had two birdies off the bat and it was nice. Just to have that little buffer I made two bogeys on the front nine as well,” added Lee. “I had really good saves—up and downs from a lot of places.”

Lee, the Ladies Professional Golf Association (LPGA) Tour scoring average and strokes gained leader, hit a total of 47 of 56 fairways, 57 of 72 greens in regulation, averaged 29 putts per round as well as 265 yards in driving distance, and made 3 of 6 sand saves.

The victory is Lee’s eighth on the LPGA tour, to go along with two victories each on the Ladies European and Australian Tours. Her other major victory came last year July 25 at the Amundi Evian Championship.

Lee’s parents, Soonam and Clara Lee, emigrated to Australia in the early ’90s from South Korea.

Her younger brother, Min Woo Lee, won the 2016 U.S. Junior Amateur, before his first top-10 finish in a major at The Masters in April. They are the only first brother-sister duo to both win the United States Golf Association junior championships.

Lee received a congratulatory call from her brother at the end of the tournament, and texts throughout the tournament from Aussie great Karrie Webb, who was a former World No. 1 winning seven majors.

Webb had established a scholarship program for young Aussie amateurs to experience a week with her at major tournaments, and Lee twice was a recipient of the scholarship–including Webb’s second U.S. Women’s Open victory at Pine Needles in 2001.

Following the victory, Lee ascends to the top of the “Race to CME Globe” rankings with 1,851.991 points, and is No. 4 in the World Rolex Rankings.

LPGA veteran, Harigae, earned $1 million for her second-place finish with a score of 9–under, 275. The Monterey, California native has seven professional victories, on the Futures and Cactus Tours, but has yet won on the LPGA.

Other notables are Anna Nordqvist, Sweden, and England/UCLA’s Bronte Law tied for sixth at 4–under.

Korda competed for the first time since February recovering from surgery due to a blood clot in her left arm.

“The first week back you have rust, so you don’t really expect much from your game,” said Korda. “You don’t know where your game is at. Knowing that I can play on a really tough golf course at a major and even kind of be in contention is definitely a positive.”

The LPGA Tour moves to the Seaview, Bay Course in Galloway, NJ for the ShopRite LPGA Classic from June 10–12.