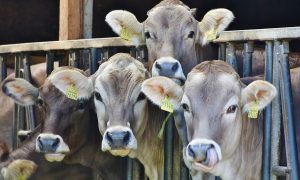 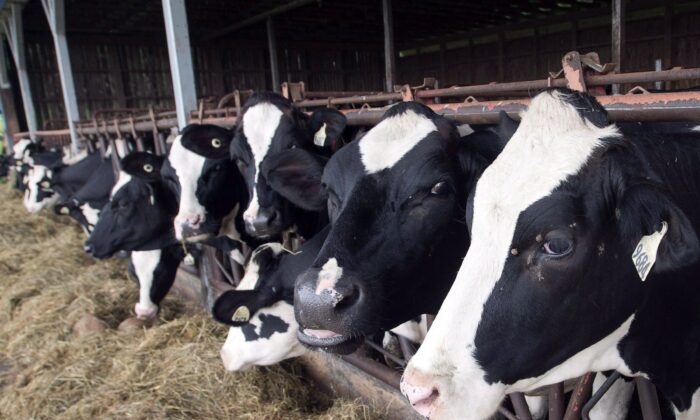 Cows are seen at a dairy farm in Danville, Quebec, in a file photo. (The Canadian Press/Ryan Remiorz)
Canada

US Win in Trade Dispute Could Benefit Canadian Dairy Consumers

The trade agreement that replaced NAFTA has put new pressures on the Canadian dairy industry that has long operated under a government-regulated supply management system. But while some are concerned about the impact on Canada’s dairy sector, others say a U.S. win could be good news for Canadian consumers.

Food distribution and policy expert Sylvain Charlebois says that if the United States wins the trade dispute, Canadians will have more choices than what they had before under the status quo.

“The biggest losers are Canadian consumers because they don’t have access to more good products,” the director of Dalhousie University’s Agri-Food Analytics said in an interview about the status quo .

“Processors are trying to showcase Canadian products against foreign products, when Canadians should actually have more choice.”

On May 25, U.S. President Joe Biden’s administration launched a formal trade dispute against the Canadian dairy industry, under provisions within the U.S.-Mexico-Canada Agreement (USMCA), to examine whether American consumers are being denied fair access to the Canadian market.

In the USMCA, signed at the end of 2018, Canada agreed to expand its tariff-rate quotas (TRQs) to allow more dairy imports without prohibitive tariffs. This limited access, if implemented as negotiated, was projected to increase U.S. dairy exports by more than US$314 million a year, according to the U.S. International Trade Commission.

However, Washington alleges that Canada facilitated unfair protectionism in the way that it issued TRQs, and under USMCA provisions has requested a panel to rule on the matter.

After ratifying the USMCA in March 2020, Canada maintained its authority on who could issue import permits and allocated 100 percent of its dairy TRQs among those categorized as distributors, processors, and “further processors.” Domestic dairy processors received permits and tended to import lower-value milk products and turn them into higher-value, retail-ready products. The United States would prefer they imported those higher-value products outright.

Charlebois says that while “the devil is in the details” of the dispute, the Biden administration has some basis for its claim.

“[Canadian] processors are in conflict really because they do manufacture cheese [and] sell cheese to Canadians, and so they’re very careful in terms of what type of product they want to import. Essentially, the Americans have every right to be a little bit upset.”

The supply of dairy, poultry, and eggs is artificially managed in Canada, driving up prices in ways that have a disproportionate effect on the poor. A Montreal Economic Institute analysis published in 2016 found that the number of Canadians pushed into poverty by supply management is estimated to range from about 133,000 to over 180,000 depending on the income measure used.

Canada has over 12,000 dairy operations with an estimated 940,000 dairy cows, the bulk of them in vote-rich Ontario and Quebec. Dairy farmers’ annual marketing budget exceeds $130 million, according to Charlebois, who says the industry knows how to flex its muscles.

Maurice Doyon, professor of agri-food economics at Laval University in Quebec City, says that Americans could use the dispute over dairy to justify their own protectionist measures.

“It puts some pressure on Canada. The pressure might not be used for dairy. That pressure might be for something else, [such as] tariffs on softwood lumber or steel or whatever else,” he said in an interview.

Doyon believes Canada will win the dispute but doesn’t blame Biden for responding to his own domestic dairy lobby that wants action.

“Why not go through the process? What am I going to lose? … What bad can happen for the Americans? Nothing, and maybe they’ll gain something. Politically it’s certainly not bad for them,” he said.

The dispute panel’s final report is expected in November. Representatives of the Canadian dairy industry told The Epoch Times they expect a favourable verdict.

“The Canadian government has stated that it is confident that its policies are in full compliance with its obligations under CUSMA,” said Mathieu Frigon, president and CEO of the Dairy Processors Association of Canada (DPAC).

“DPAC shares this view and is ready to provide the necessary support to the Canadian government in vigorously defending our country’s position during the dispute settlement process.”

Similarly, Pierre Lampron, president of Dairy Farmers of Canada, said, “Canada’s allocation of its TRQs is consistent with the terms of CUSMA/USMCA. Thus we believe the Canadian government has a solid case to present before the panel and ultimately our right to administer TRQs will be recognized.

The U.S. complaint was first made in December under the Trump administration, and wasn’t resolved in subsequent discussions. The Biden administration is the first to initiate the trade dispute settlement process found in Chapter 31 of the USMCA.