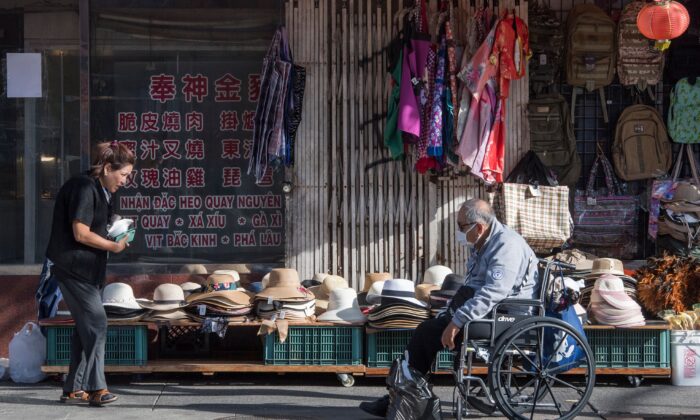 Shoppers are seen by a deserted Los Angeles Chinatown as most stay away due to fear of the novel coronavirus, COVID-19, epidemic after the US has now 15 confirmed cases, in Los Angeles, California, on Feb. 13, 2020. (Mark Ralston/AFP via Getty Images)
US News

US Will Test People With Flu-Like Symptoms for New Coronavirus

The United States will start testing people in five cities who are showing flu-like symptoms for the new coronavirus COVID-19, a top Centers for Disease Control (CDC) official said on Friday.

“CDC has begun working with five public health labs across the U.S. to tap into their ability to conduct community-based influenza surveillance, so that we can begin testing people with flu-like symptoms for novel coronavirus,” Dr. Nancy Messonnier, director of the CDC’s National Center for Immunization and Respiratory Diseases, told reporters in a phone call.

The cities are Los Angeles and San Francisco in California, Seattle in Washington state, Chicago in Illinois, and New York City.

More sites will be announced in the coming weeks.

The same labs that are testing for influenza in the United States will test samples that turn up negative for the flu for the virus.

Testing previously only took place among those who have symptoms consistent with COVID-19—coughing, fever, and respiratory issues—and who have been to places where the outbreak is spreading or had contact with confirmed or suspected cases.

The laboratories doing the testing will be leveraging existing influenza and viral respiratory surveillance systems to monitor people for flu-like symptoms, the director said. Authorities have a good head start on the new virus because of planning for previous outbreaks, especially influenza, she said.

“This is an extra layer of our response that will help us detect if and when this virus is spreading in the community,” Messonnier said. “All of our efforts now are to prevent the sustained spread of the virus in our community, but we need to be prepared for the possibility that it will spread.”

Results from the surveillance would be “an early warning signal” to trigger a change in the official response strategy, she said.

No cases of COVID-19 have been detected in any of the cities so far except for Chicago, where a woman who traveled to China tested positive last month. Her husband later tested positive in one of the only two cases in the United States that came from person-to-person transmission.

Fifteen patients have tested positive in the country. The majority are located in California, with cases also confirmed in Washington state, Arizona, Illinois, Texas, and Massachusetts. Three of the cases are among the people evacuated from Wuhan, the epicenter of the new virus.

Messonnier said that some spread of the new virus may happen before people show symptoms. Studies and reports from multiple countries indicate the virus can be transmitted by people not showing symptoms, a phenomenon known as asymptomatic spread. The spread is compatible with what health experts know about other respiratory viruses, including the flu, or influenza.

Asymptomatic transmission or contact transmission, defined as transmission through touching contaminated surfaces and then touching the eyes or the mouth, are not the main drivers of the spread, Messonnier said. She said the virus primarily spreads from person-to-person through close contacts, or within six feet, through respiratory droplets from an infected person coughing or sneezing.

The announcement was originally made the previous day with few details. Secretary of Health and Human Services Alex Azar, testifying to Congress in Washington, said that the CDC had begun working with health departments in five cities to use its flu surveillance network to test individuals with flu-like symptoms.

“Many questions about the virus remain, and this effort will help see whether there is broader spread than we have been able to detect so far,” he added.