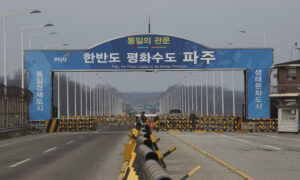 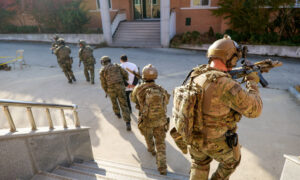 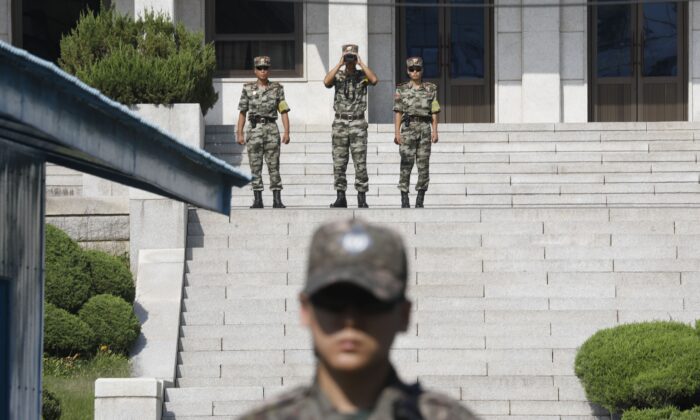 North Korean soldiers (top) look toward the South as a South Korean soldier (bottom) stands guard at the truce village of Panmunjom inside the Demilitarized Zone (DMZ) separating the two Koreas on Aug. 28, 2019. (KIM HONG-JI/AFP via Getty Images)
US News

A White House official has said that Washington will “take action” if Pyongyang tests a long-range or nuclear missile, adding that the United States would be “extraordinarily disappointed” if that took place.

The United States has “a lot of tools” in its toolkit to deal with North Korea, White House national security adviser Robert O’Brien said in a Dec. 29 interview with ABC News. Washington is concerned over Pyongyang’s recent threats of a “Christmas gift,” he said, noting that they’re still monitoring the situation closely.

“We will reserve judgment, but the United States will take action, as we do in these situations,” O’Brien said. “If Kim Jong-un takes that approach, we will be extraordinarily disappointed, and we will demonstrate that disappointment.”

In early December, North Korean leader Kim Jong-un threatened the United States with a possible “Christmas gift,” saying that the Trump administration was running out of time to salvage nuclear negotiations. Recently, the United States and South Korea have conducted drills simulating the infiltration of an enemy facility amid tensions with North Korea over its unilaterally set year-end deadline.

Both Republican and Democratic administrations have attempted to deal with North Korea without success over the years, O’Brien said, adding that the current leadership is taking a new approach.

“President [Donald] Trump took a different tack, with personal diplomacy. And, so far, we have had some success,” he said. “Kim Jong-un promised to denuclearize the Korean Peninsula. We want to hold him to that commitment.”

“But, if he doesn’t, we have other tools in the toolkit, as the United States, and we will use those as necessary.”

Weeks ago, Stephen Biegun, the U.S. special envoy for North Korea, said the United States won’t accept Pyongyang’s unilateral deadline, as the communist regime has sought concessions in nuclear talks. Biegun said Washington is open to talks on denuclearization and urged Pyongyang to return to the negotiating table.

Nuclear talks between the United States and North Korea have been stalled since a February summit ended with no agreement reached. Kim and Trump have met three times since June 2018.

“The North is playing the game of, ‘Let’s see if we can beat up the United States and get concessions,’ because that is what they do,” he said. “They are like a bully or kind of a criminal gang that extorts people. We [the United States] are just not playing the extortion game anymore.”

Meanwhile, several satellite images taken on Dec. 19 by Planet Labs show the completion of a new structure at the March 16 Factory near Pyongyang, where North Korea is believed to be developing and manufacturing vehicles used as mobile launchers for long-range ballistic missiles.

O’Brien said Trump has laid out a path for North Korea if it gives up its nuclear program, in that “they can have an extraordinarily bright future with a great economy.” He also said the United States can inflict “a lot of pressure” on Pyongyang.

“There’s a real opportunity for North Korea,” he said. “Now, whether they take that opportunity or not, we’ll have to see. And if they don’t take it, the United States is still the leading military power in the world.”

China and Russia recently proposed that the U.N. Security Council lift some of its sanctions on North Korea, in what the countries said was an attempt to break the current deadlock. But it remains unclear whether Beijing can convince Seoul and Tokyo to break ranks with Washington, which has made its opposition against lifting such sanctions clear and can veto any resolution.

There are some “channels of communication” between Washington and Pyongyang “that are open,” O’Brien said, but he didn’t elaborate.

“[Kim] has two paths in front of him; he’s got a glorious path for the people of North Korea where they could become like South Korea and be a very prosperous, very wealthy country, or there’s another path that takes them down the road of sanctions and isolation and being a pariah state,” he said.