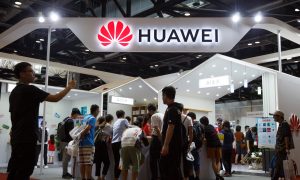 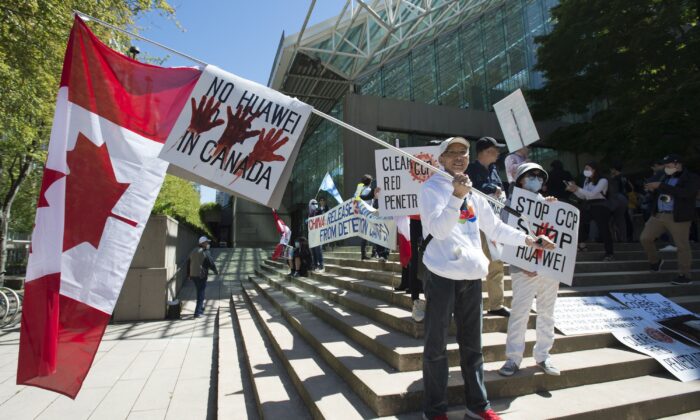 A crowd protests against Huawei on the steps of the B.C. Supreme Court during a hearing on CFO Meng Wanzhou’s extradition case in Vancouver May 27, 2020. (THE CANADIAN PRESS/Jonathan Hayward)
Canada

US Will Reevaluate Intelligence-Sharing with Canada if Huawei Participates in Country’s 5G: State Department

The U.S. State Department has said intelligence-sharing with Canada will be reevaluated if Chinese telecom giant Huawei is allowed to take part in building the country’s 5G wireless network.

Canada remains the only member of the Five Eyes intelligence alliance that has not yet taken a clear position on whether to block Huawei from its national 5G infrastructure, though the federal government has been reviewing the issue for nearly two years.

During a press conference on June 4, Prime Minister Justin Trudeau did not respond directly when a reporter asked if he delayed the decision to ban Huawei Canada’s 5G for fear of angering Chinese leader Xi Jinping.

“Every step of the way we have listened to our security agency, our intelligence services, worked with our allies. We’ll make the right decisions for Canadians, to both keep Canadians and businesses safe while at the same time ensuring competitiveness in our telecom industry,” Trudeau said.

Meanwhile, private telecom companies in Canada have moved ahead with choosing their business partners for their 5G networks. BCE Inc. and Telus Corp. announced on June 2 that they will be using components from European providers Ericsson and Nokia in their 5G systems.

Rogers Communications Inc., on the other hand, has had a long-standing partnership with Ericsson and was the first to activate 5G in Toronto and other provinces earlier this year. The company’s vice-chair told Bloomberg last year that Huawei is a threat to Canada and should be barred from 5G networks.

The Trump administration has argued that Huawei poses major threats to U.S. national security because private companies in China are often compelled to provide sensitive information to the communist regime. Under espionage and national security laws in China, companies are required to hand over network data upon request.

On May 15, the U.S. Department of Commerce ramped up sanctions against Huawei by modifying the export control rules, aiming to “protect U.S. national security by restricting Huawei’s ability to use U.S. technology and software to design and manufacture its semiconductors abroad.”

A recent Angus Reid survey showed that only 14 percent of Canadians think Huawei should be allowed to participate in the country’s 5G networks.

Last week, British media reported that Boris Johnson’s government is looking to form a 10-member coalition with other countries to secure 5G supplier alternatives to Huawei. There has been increasing backlash against the Chinese regime in the U.K. over its handling of the COVID-19 outbreak.

Now caught in the U.S.-China crossfire over 5G, Canada’s relations with China have already been tense since Hauwei CFO Meng Wanzhou was arrested in Vancouver in 2018 on a U.S. extradition request. In retaliation, two Canadians were detained in China and some Canadian exports to China were blocked.

On May 27, Associate Chief Justice Heather Holmes ruled in the British Columbia Supreme Court ruled that Meng’s case meets the criteria for double criminality—meaning that her charges could be tried as crimes in both the United States and Canada.