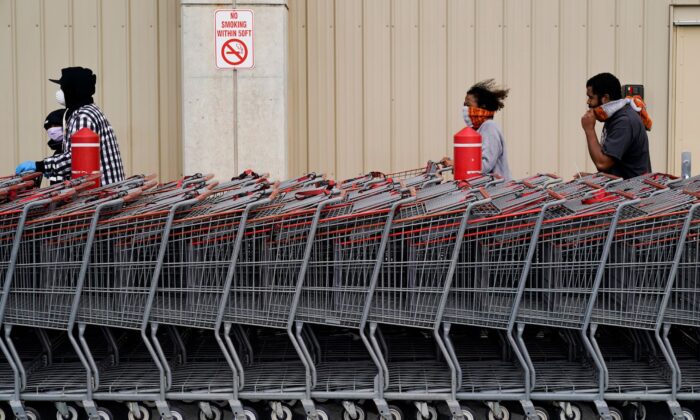 People wear masks as they wait to enter a Costco Wholesale store during the outbreak of coronavirus disease (COVID-19) in Washington on April 10, 2020. (Joshua Roberts/Reuters)
Economy

WASHINGTON—U.S. wholesale inventory accumulation slowed in July, lagging further behind sales, and it is now taking wholesalers the shortest time in seven years to clear shelves.

Inventories are a key part of gross domestic product. The component of wholesale inventories that goes into the calculation of GDP increased 0.7 percent in July.

Business inventories were depleted in the first half of the year, but shortages amid persistent supply bottlenecks because of the COVID-19 pandemic and recent ports congestion in China are frustrating efforts to replenish stocks.

Still, inventory rebuilding is expected to underpin economic growth in the second half of the year.

Sales at wholesalers increased 2.0 percent in July after accelerating 2.3 percent in June. At July’s sales pace it would take wholesalers 1.20 months to clear shelves, the fewest since July 2014, from 1.22 in June.