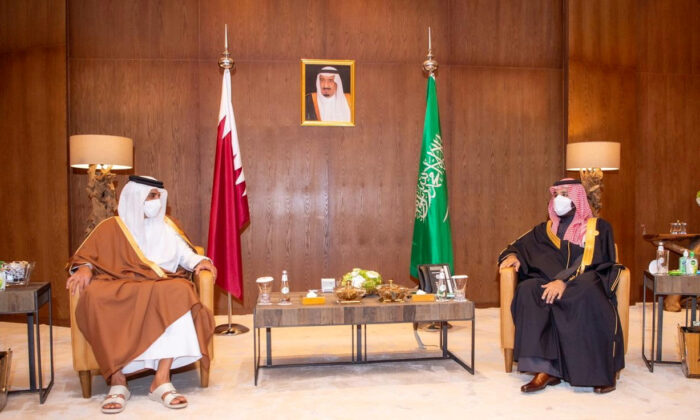 US Welcomes Breakthrough to Ease Rift Between Gulf Countries and Qatar

The United States has welcomed the pledge made on Tuesday by Gulf Arab leaders to restore cooperation with Qatar in military, economic, health, counter-corruption, and cultural initiatives following Saudi Arabia’s decision to end a 3 1/2-year embargo of the tiny energy-rich country.

Saudi Arabia and its three Arab allies agreed to restore full ties with Qatar at a summit of the Gulf Cooperation Council (GCC) in the Saudi Kingdom on Tuesday, the Saudi foreign minister said.

Saudi Arabia’s foreign minister Faisal Bin Farhan al-Saud promised to end a boycott of Qatar in 2017 with the aim of strengthening an Arab alliance against Iran.

Saudi Arabia, the United Arab Emirates, Bahrain—member states of the GCC—and Egypt severed their ties with Qatar, including closing transport routes in 2017, over allegations that Qatar supported Iranian-backed terrorism. Qatar denied the claims.

Farhan al-Saud told a news conference after the gathering of Gulf Arab states, also attended by Egypt, that there was political will and good faith to guarantee implementation of the agreement to restore diplomatic and other ties, including the resumption of flights.

“Today … is a complete erasing of all disagreements and a full restoration of diplomatic ties. … It will hopefully be a strong pillar for the future and stability of the region,” al-Saud said.

In response to the Saudi foreign minister’s statement at the Gulf Summit, Qatar’s counterpart tweeted that the two countries have “closed the page on disagreement.”

U.S. Secretary of State Mike Pompeo called the agreement a breakthrough “which marks a positive step toward restoring Gulf and Arab unity.”

“We have long stressed that a truly united Gulf will bring added prosperity through the free flow of goods and services and more security to its people,” Pompeo said in a statement.

“We hope the Gulf countries will continue to reconcile their differences. Restoring full diplomatic relations is imperative for all parties in the region to unite against common threats. We are stronger when we stand together,” Pompeo continued.

The Trump administration has for over a year been pressing for a resolution, particularly reopening airspace to Qatar, to bolster efforts to contain Iran. But a deal had proven elusive despite U.S. and Kuwaiti mediation efforts.

“Qatar plays an invaluable role in helping stabilize Gaza, as well as regional efforts to de-escalate tensions both in Syria and in Lebanon. To keep our focus on this work, and to close the door to increased Iranian meddling, it’s past time to find a solution to the Gulf rift,” Pompeo said in September at the third annual strategic dialog between the United States and Qatar.

White House senior adviser Jared Kushner and other officials made a renewed push with the support of Prince Mohammed, the source said, handing Trump another diplomatic win after normalization deals between Israel and several Arab states.

Jon Alterman, a senior vice president and a director at the Center for Strategic and International Studies (CSIS) in Washington told CSIS that the agreement “is more of a truce than a peace treaty.”

“Qatar’s neighbors will reopen their airspace and resume travel and trade, and we can presume there will be some moderation in Qatar’s regional behavior,” Alterman said, but “Qatar still feels that its neighbors want to trample on its sovereignty, and the neighbors feel that Qatar remains a reckless actor in regional affairs. Confidence building will take years and will have setbacks.”

However, the majority of Qataris (61 percent) agree that “their intra-Arab rift should end through compromise on both sides, asserted Austin Corona, a FIKRA Forum researcher, and David Pollock, a fellow at The Washington Institute.

Iran enjoys little support among Qataris, Corona and Pollock said explaining that 63 percent of them perceived the expiration of the UN arms embargo on Iran as somewhat negative and 72 percent viewed overall relations with Iran as not important.

Karim Mezran, a director and resident senior fellow at the Atlantic Council said that “The end of the so-called ‘Gulf rift’ would constitute a major regional step forward. It will force the various states to adopt a foreign policy that is more attuned to the sensitivities of the other members and thus moderate eventual excesses.”

Sina Azodi, a Ph.D. candidate at the University of South Florida and a nonresident fellow at the Atlantic Council said that “this rapprochement will come as bad news for Iran, which increasingly sees itself isolated and under pressure. Just recently, both the UAE and Bahrain normalized relations with its adversary, Israel. A united GCC will not be to Iran’s benefit.”

President-elect Joe Biden has said he will take a harder line with Saudi Arabia over its human rights record and the Yemen war, according to Reuters.

Amjad Ahmad, a director and resident senior fellow at the Atlantic Council said that “the driving force for ending the feud may be political aimed to appease” Biden if he becomes the president.