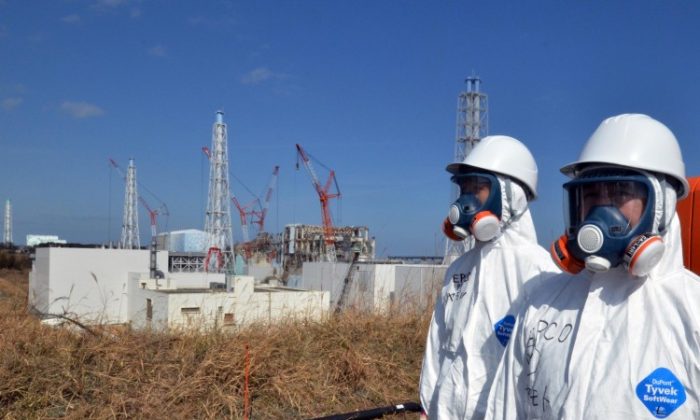 Workers in safety gear stand near the stricken Fukushima Daiichi nuclear power plant in this recent photo. The U.S. will examine international efforts in securing nuclear materials at a conference in Seoul that begins March 26. (Yoshikazu Tsuno/AFP/Getty Images)
US

It was almost three years ago that President Barack Obama gave his April speech in Prague on his vision of a world free of nuclear weapons.

One of Obama’s key announcements was a “new international effort to secure all vulnerable nuclear material around the world within four years.” He said this would include building on efforts “to break up black markets,” catch material in transit, and “use financial tools to disrupt this dangerous trade.”

This effort, and how effective it has been, will be a key topic at the March 26 Nuclear Security Summit in Seoul, South Korea.

Although “significant progress” has been made on commitments each nation made during the Nuclear Security Summit in Washington, “Substantial work remains if the summit process is to meet its goal of securing all vulnerable nuclear materials,” states Kelsey Davenport, Herbert J. Scoville peace fellow at the Arms Control Association (ACA), on the association website.

The international strategy is divided into three parts to secure nuclear materials—one at individual sites, one at the national level, and one at the global level.

“With this three-tiered strategy, we’ve made significant progress in the four-year effort to secure vulnerable nuclear materials,” said Thomas Countryman during a March 14 Senate hearing on the global nuclear nonproliferation efforts, in a transcript.

Countryman adds, however, that the “persistence of illicit trafficking” of nuclear materials usable in weapons “demonstrates that efforts to consolidate materials and secure facilities are not enough.”

There have been a few timely incidents highlighting the importance of this. One of the top leaders of the Taliban in Pakistan, Omar Khalid, released a new video calling for the Taliban to overthrow the Pakistani government and seize its nuclear weapons, reported The Long War Journal.

Meanwhile, in Libya, terrorist groups Hezbollah and Hamas got their hands on surface-to-air missiles (SAMs) belonging to the former regime. An Israeli official told Aviation Week the SAMs are now in the Gaza strip.

According to the Government Accountability Office (GAO), there are a few gaps in the current system, and the United States needs to take additional steps to secure vulnerable nuclear materials. This was described in a March 14 GAO report, “Further Actions Needed by U.S. Agencies to Secure Vulnerable Nuclear and Radiological Materials.”

It reiterates findings after nations set their strategies in 2010, noting “the initiative lacked specific details regarding how the initiative will be implemented,” adding, “As a result, key details associated with the initiative are unclear, including its overall estimated cost, time frame for completion of work, and scope of planned work.”

On another front, the United States “faces challenges” with keeping track of and determining the security of U.S. nuclear materials overseas. GAO reiterates findings from 2011, “Federal agencies are not able to fully account for U.S. nuclear material overseas that is subject to nuclear cooperation agreements.” Also, the agreements lack access rights to let agencies monitor the security of these materials.

There are also problems with coordinating global nonproliferation efforts, “specifically, GAO identified potential fragmentation and overlap among some U.S. programs that played a role in preventing and detecting the smuggling of nuclear materials overseas,” states the report.

Yet, while there are still gaps, there has been significant progress. This is described in a joint report from the Arms Control Association and the Partnership for Global Security.

It states, “Two years after the 2010 Nuclear Security Summit (NSS), approximately 80 percent of the national commitments made there have been completed, and other notable steps to advance nuclear security have been taken by states in support of the summit’s communiqué and work plan objectives.”

These accomplishments include the United States removing 400 kilograms of highly enriched uranium (HEU) and plutonium. It also “down blended 700 kilograms of HEU from the civil nuclear programs of countries around the world.”

It states that while the 2010 conference was mainly focused on getting other countries on board, at the upcoming 2012 conference, there are new national commitments “where countries can act individually or in concert with neighbors and allies to take quick, concrete steps to create new nuclear security partnerships, initiatives, and funding streams.”

“At the 2012 summit, participants will face many challenges to continuing to build stronger global nuclear security structures,” it states, noting that “Combined with the collective political commitments that all countries are expected to endorse in the ‘Seoul Communiqué,’ ambitious national and regional commitments can help lay the groundwork for another summit in 2014 and the nuclear security agenda for years to come.”