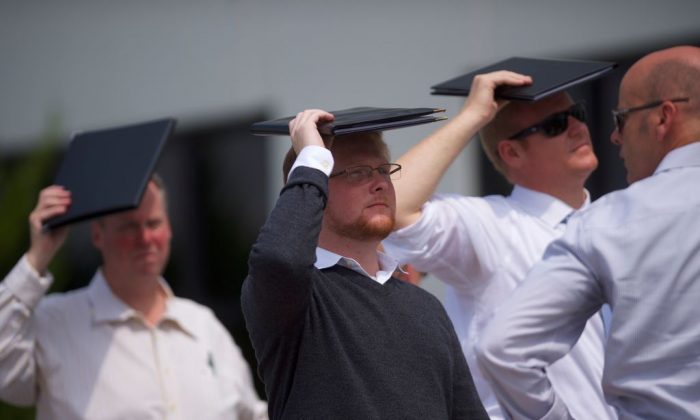 Job seekers use their folders to shield the sun at an Amazon jobs fair at the Amazon Fulfillment Center in Robbinsville, N.j., on Aug. 2, 2017. Mark Makela/Getty Images
Economies

WASHINGTON—The number of Americans filing for unemployment benefits fell to a near 49-year low last week, pointing to sustained labor market strength, which should continue to underpin economic growth.

The labor market, which is viewed as being near or at full employment, is steadily boosting wage growth, which could help to support consumer spending as the stimulus from the Trump administration’s $1.5 trillion tax cut package fades.

“The momentum in the labor market remains strong and we expect the unemployment rate to continue to decline,” said John Ryding, chief economist at RDQ Economics in New York.

Initial claims for state unemployment benefits dropped 8,000 to a seasonally adjusted 207,000 for the week ended Sept. 29, the Labor Department said on Oct. 4. That reversed the bulk of the increase from the prior week when claims were boosted by Hurricane Florence, which slammed North and South Carolina in mid-September.

Applications fell to 202,000 during the week ended Sept. 15, which was the lowest level since November 1969. Economists polled by Reuters had forecast claims slipping to 213,000 in the latest week. The Labor Department said claims for North and South Carolina continued to be affected by the storm.

The four-week moving average of initial claims, considered a better measure of labor market trends as it irons out week-to-week volatility, rose 500 to 207,000 last week.

U.S. financial markets were little moved by the report.

The claims data has no bearing on September’s employment report, which is scheduled for release on Oct. 5. According to a Reuters survey of economists, nonfarm payrolls likely increased by 185,000 in September after surging 201,000 in August. The unemployment rate is forecast falling one-tenth of a percentage point to 3.8 percent, an 18-year low first hit in May.

Payrolls growth could, however, surprise on the upside as data on Oct. 3 showed an increase in hiring by private companies in September and a jump in private sector jobs.

The Federal Reserve raised interest rates last week for the third time this year and removed the reference to monetary policy remaining “accommodative.”

In a separate report on Oct. 4, the Commerce Department said new orders for U.S.-made goods recorded their biggest increase in nearly a year in August, but signs of weakness in business spending on equipment suggested manufacturing could be slowing.

Factory goods orders surged 2.3 percent, the largest increase since September 2017, boosted by a surge in demand for aircraft, after falling 0.5 percent in July. Orders increased 8.6 percent on a year-on-year basis in August.

Manufacturing, which accounts for about 12 percent of the U.S. economy, is being supported by robust domestic demand, but momentum is expected to gradually slow amid worker shortages, an increasingly bitter trade war between the United States and China, a strong dollar, and moderating global growth.

An Institute for Supply Management survey of manufacturers published on Oct. 3 showed factory activity retreated from a 14-year high in September.

Shipments of core capital goods, which are used to calculate business equipment spending in the gross domestic product report, dropped 0.2 percent in August instead of rising 0.1 percent as reported last month.

Core capital goods shipments increased 1.2 percent in July. Business spending on equipment slowed in the second quarter after growing robustly since the first quarter of 2017.