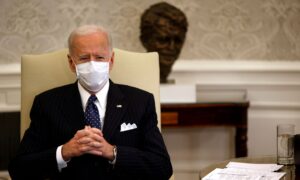 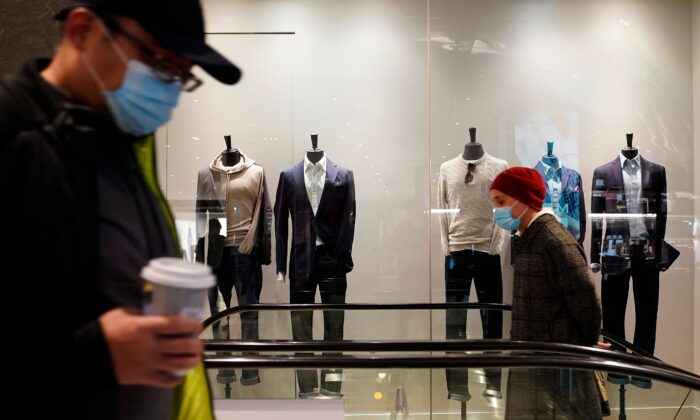 People wearing facemasks pass by a men's clothing store at The Shops at Columbus Circle in New York, on Feb. 15, 2021. (Timothy A. Clary/AFP via Getty Images)
Economy

WASHINGTON—Fewer Americans filed new claims for unemployment benefits last week amid falling COVID-19 infections, but the near-term outlook for the labor market is unclear after winter storms wreaked havoc in the South region in the middle of this month.

Initial claims for state unemployment benefits totaled a seasonally adjusted 730,000 for the week ended Feb. 20, compared to 841,000 in the prior week, the Labor Department said on Thursday. Economists polled by Reuters had forecast 838,000 applications in the latest week.

Claims have been out of sync with an improvement in overall economic conditions as the winter coronavirus wave recedes and $900 billion in additional pandemic relief money provided by the government at the end of December flows through the economy.

Daily coronavirus cases and hospitalizations have dropped to levels last seen before the Thanksgiving and Christmas holidays, allowing more services businesses to reopen. Retail sales increased by the most in seven months in January. Consumers’ perceptions of the labor market also improved this month.

The persistently higher claims have been partially blamed on fraud in Ohio. A global semiconductor chip shortage has forced temporary closures and shift reductions at some motor vehicle assembly plants. In the coming week, claims could be boosted by the stormy weather in the South, which left large parts of Texas in the dark and without water for days.

“Measurement issues in the unemployment insurance data are not becoming any less problematic as time goes on,” said Lou Crandall, chief economist at Wrightson ICAP in Jersey City.

Though claims have dropped from a record 6.867 million last March when the pandemic hit the United States’ shores, remain above their 665,000 peak during the 2007-09 Great Recession.

Federal Reserve Chair Jerome Powell told lawmakers this week that the U.S. central bank would keep interest rates low and continue to pump money into the economy through bond purchases “at least at the current pace until we make substantial further progress towards our goals (maximum employment and inflation).”

A resurgence in COVID-19 infections towards the end of last year and delays in providing more fiscal stimulus sapped considerable momentum from the economy in the fourth quarter, other data on Thursday confirmed.

Gross domestic product increased at a 4.1 percent annualized rate, the Commerce Department said in its second estimate of fourth-quarter GDP growth. That was a slight upward revision from the 4.0 percent pace reported last month. The economy grew at a record 33.4 percent rate in third quarter.

The economy’s struggles in the final three months of 2020 are mostly in the rear view mirror. The sharp rebound retail sales and President Joe Biden’s massive $1.9 trillion recovery package, which is gaining traction in the U.S. Congress, have prompted economists to boost their first-quarter growth estimates to as high as a 6 percent rate from as low as a 2.3 percent pace.