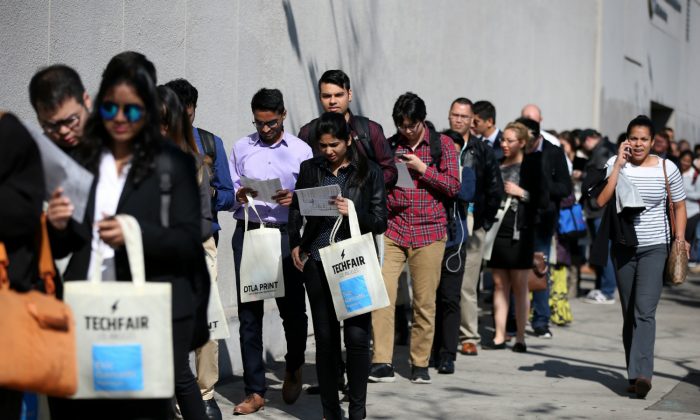 The jobless claims report from the Labor Department on Aug. 8, however, does not fully account for the impact of the recent escalation in the bitter trade war between the United States and China, which has led to an inversion of the U.S. Treasury yield curve and raised the risk of a recession.

Worries about the trade war’s impact on the U.S. economic expansion, the longest on record, prompted the Federal Reserve to cut interest rates last week for the first time since 2008. Financial markets have fully priced in another rate cut next month.

Expectations for a 50-basis-point cut at the Fed’s Sept. 17-18 policy meeting have also risen.

“Initial claims have been sending a reasonably upbeat message about conditions in the labor market,” said Daniel Silver, an economist at JPMorgan in New York. “Today’s report likely doesn’t contain much information about the period since the recent escalations in trade tensions.”

Initial claims for state unemployment benefits declined 8,000 to a seasonally adjusted 209,000 for the week ended Aug. 3, the Labor Department said. Economists polled by Reuters had forecast claims would be unchanged at 215,000 in the latest week.

“The message of the unemployment claims data into early August is that layoff activity remained subdued and the labor market is still tight,” said John Ryding, chief economist at RDQ Economics in New York. “Though equity market volatility and low bond yields are driving pessimism about the economic outlook … we would have to see initial claims sustain a rise to the 250,000 level to become concerned about the recession.”

U.S. stocks were trading higher as unexpectedly better Chinese data and a steadying of the yuan provided some comfort to investors rattled by the rise in U.S.-China trade tensions. Prices of U.S. Treasuries fell while the dollar was slightly stronger against a basket of currencies.

Last week’s drop in claims pushed them to the lower end of their 193,000-244,000 range for this year. The four-week moving average of initial claims, considered a better measure of labor market trends as it irons out week-to-week volatility, edged up 250 to 212,250 last week.

While hiring has slowed, the pace of job gains remains well above the roughly 100,000 needed per month to keep up with growth in the working-age population.

Non-farm payrolls increased by 164,000 jobs in July, down from 193,000 in June. Job growth over the last three months averaged 140,000 per month, the lowest in nearly two years, compared to 223,000 in 2018. The moderation in employment growth partly reflects a shortage of workers.

“While net employment growth depends on gross hiring as well as the pace of layoffs, and the trend in payrolls gains may have moderated a bit, major weakening in employment growth is invariably associated with an uptrend in claims,” said Jim O’Sullivan, chief U.S. economist at High Frequency Economics in White Plains, New York.

The economy grew at a 2.1 percent annualized rate in the second quarter, slowing from the first quarter’s brisk 3.1 percent pace. Growth is seen below a 2.0 percent rate in the July-September quarter.

Slower economic growth was also underscored by a separate report from the Commerce Department on Thursday showing wholesale inventories unchanged in June instead of rising 0.2 percent as estimated last month.

The component of wholesale inventories that goes into the calculation of gross domestic product edged up 0.1 percent in June.

Businesses are also carefully managing stock levels as the economy’s outlook continues to darken amid the escalation in trade tensions between the United States and China, which has roiled financial markets.

Sales at wholesalers dropped 0.3 percent in June after falling 0.6 percent in May. At June’s sales pace it would take wholesalers 1.36 months to clear shelves, unchanged from May.