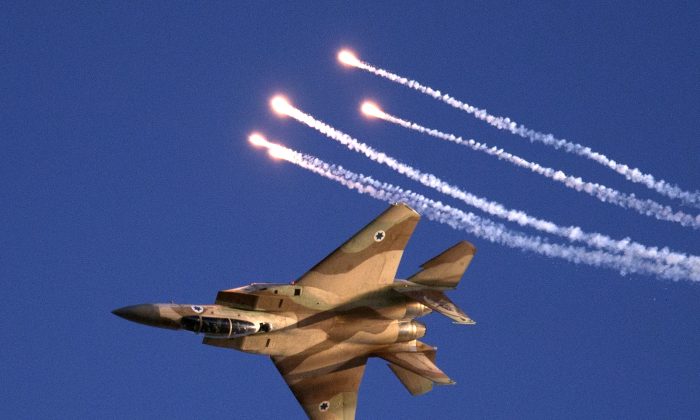 US Weapons and Planes Worth Billions Are Now Bombing Yemen

Yemen’s civil war is getting out of hand, and Arab states, along with a few other countries, decided they need to do something.

Countries with the Gulf Cooperation Council, Morocco, Pakistan, and Sudan are now carrying out coalition airstrikes on Shiite Houthi militias who have taken over large swathes of Yemen. It’s being reported that Saudi Arabia is deploying about 100 fighter planes to take part in the bombing sorties.

It’s likely the vast majority of these planes are American-made F-15SA fighter jets that were sold to Saudi Arabia under a 2010 deal worth $29 billion. In the deal, Saudi Arabia purchased 84 new F-15SA fighters and upgraded about 70 older F-15S fighter jets, according to a U.S. military report published by the Defense Security Cooperation Agency.

Another report published in January by the Congressional Research Service found the United States and Saudi Arabia did more than $90 billion in weapons deals between October 2010 and October 2014, according to the Washington Post. Fighter planes, armored vehicles, bombs, and other weapons were included. Also in 2010, the United States also agreed to sell nearly 150 military helicopters to the Saudis.

The United States, France, the United Kingdom, Belgium, and Turkey all gave words of support for the Saudi-led operation in Yemen. Saudi Arabia has said it has no immediate plans to launch a ground-based operation there.

But some experts have warned that bombing runs in Yemen mark a dangerous escalation there. Yemen has been in a state of upheaval since the 2011 Arab Spring protests. The conflict could spill into neighboring countries, including Saudi Arabia.

At midnight on Thursday, the Saudi-led coalition launched the first wave of its airstrikes against the rebels. Early reports indicate about 100 Saudi warplanes are taking part in the campaign, dubbed Decisive Storm. Another 85 fighter jets from other countries are also being used.

The campaign was launched following an approximately six-month-long Houthi coup. On Wednesday, Yemen President Abd Rabbo Mansour Hadi, was forced to flee the country via boat.

According to the Brookings Institution senior fellow Kenneth M. Pollack, the coalition airstrikes won’t break the Houthis, who are believed to receive some backing from Iran, the arch-enemy of Saudi Arabia.

“If the airstrikes fail, as seems more likely than not, there is a real danger that these same states will decide to intervene on the ground—and that intervention will be largely composed of Saudi forces,” he wrote on Thursday.

Pollack also argued that Yemen’s conflict is basically a civil war, and foreign intervention—whether from the Gulf states or the United States—will only prolong the conflict.

“Of greatest importance in this case, [civil wars] also have a bad habit of overstressing the intervening state—especially when that state has limited capabilities and internal problems of its own,” he noted.

And regarding U.S. support for Saudi Arabia, Pollack said Washington “needs to restrain its allies for their own good.”

“The long and well-examined history of civil wars offers a clear warning that greater Saudi intervention in Yemen is unlikely to improve the situation and could easily undermine the kingdom’s own security and stability over the medium to longer term. For Saudi Arabia’s sake and our own, the best thing that we can do is also the hardest: convince them to cash in, rather than double down and bust,” he said.