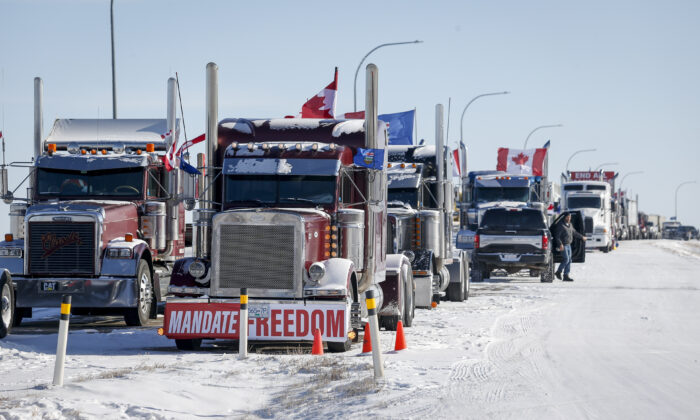 Protesters demonstrating against COVID-19 mandates gather as a truck convoy blocks the highway at the U.S. border crossing in Coutts, Alta., Canada, on Feb. 2, 2022. (The Canadian Press/Jeff McIntosh)
Canada

Internal emails from the Canadian Embassy in Washington disclosed it was under careful watch by U.S. officials over how it would handle vaccine mandates required for truckers after the measures were first announced by the Trudeau government last November.

The emails, released through Access to Information, contained “inquiries from the White House” regarding a Jan. 15 deadline set by the Liberals that all truck drivers crossing the Canada-U.S. border must be fully vaccinated against COVID-19, and provide related proof of vaccination.

“U.S. side expressed interest in learning from our first few days’ experience,” diplomats wrote in the emails obtained by Blacklock’s Reporter.

The U.S. Department of Homeland Security announced its version of the vaccine mandate for truckers on Oct 12. 2021, but with a deadline a week later than Canada’s, on Jan. 22.

On Jan. 11, four days before Canada’s mandate was set to come into force, embassy staff met with unnamed American officials to discuss the issue “at the request of the United States.”

“Canadian representatives spoke extensively to the attention we are paying to monitoring and mitigating potential impacts of the measures we will put in place as of January 15,” wrote staff.

Opposition to vaccine mandates prompted the truckers’ Freedom Convoy to converge in Ottawa on Jan. 29, starting a weeks-long demonstration in the nation’s capital. Sparked by truck drivers opposed to the federal mandate, the protest grew exponentially when supporters from across the country joined in to call for an end to various COVID-19 mandates and restrictions.

On Feb. 14, Prime Minister Justin Trudeau invoked the Emergencies Act in response to the protests.

Internal government documents released by a court order show Trudeau told his cabinet ministers on Feb. 12 that international partners had expressed concern about Canada’s ability to “handle” the protests. The document was released as part of a court challenge by constitutional rights groups who say Ottawa shouldn’t have invoked the Emergencies Act in response to the protests.

Trudeau’s comments on Feb. 12 came the day after he spoke with U.S. President Joe Biden.

During a press briefing on Feb. 11, then-White House Press Secretary Jen Psaki told reporters that Biden had expressed his concern to Trudeau about the impact of blockades at border crossings, including the Ambassador Bridge in Windsor, Ont., on U.S. companies and workers.

“The President expressed his concern that the United States—that United States companies and workers are experiencing serious effects, including slowdowns in production, shortened work hours, and plant closures,” Psaki said.

“The Prime Minister promised quick action in enforcing the law.”