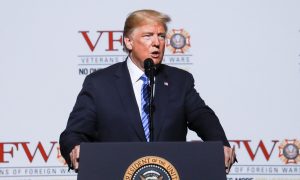 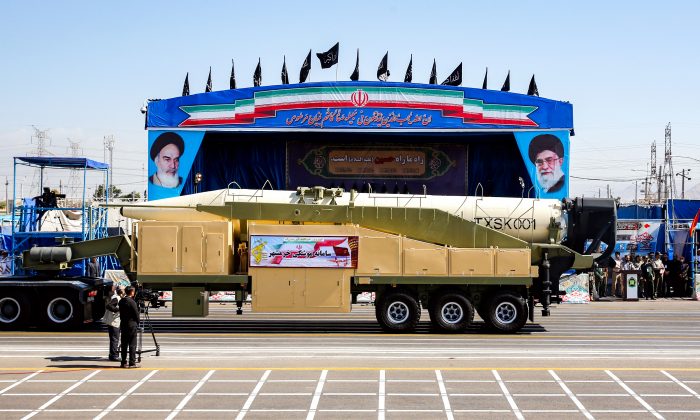 The long-range Iranian missile, Khoramshahr, is displayed during an annual military parade marking the anniversary of the outbreak of the devastating 1980-88 war with Saddam Hussein's Iraq, in the capital Tehran, on Sept. 22, 2018. (STR/AFP/Getty Images)
Politics

“The United States will not stand by and watch the Iranian regime’s destructive policies place international stability and security at risk,” Pompeo said in a statement Dec. 3. “We advise the regime to reconsider these provocative launches and cease all activities related to ballistic missiles in order to avoid deeper economic and diplomatic isolation.”

The planned launches will violate a United Nations Security Council resolution that calls on Iran to cease all activity related to nuclear-capable ballistic missiles, according to Pompeo. The Iranian regime test-fired a mid-range ballistic missile capable of carrying multiple warheads on Dec. 1.

“The satellites have been made by domestic experts and will be put on various orbits,” Taqizadeh told Iranian media in late November 2018.

If launched from Iran, an intercontinental ballistic missile with a range of 6,200 miles could reach U.S. soil.

“The United States has continuously cautioned that ballistic missile and SLV launches by the Iranian regime have a destabilizing effect on the region and beyond,” Pompeo said. “The Iranian regime is the world’s foremost state sponsor of terror and has proliferated missiles and related technology to its proxies around the Middle East.”

Washington reimposed harsh sanctions on Iran after exiting the deal. The measures focus on the regime’s energy, oil, shipping, and financial industries, among other targets. The president believes the sanctions are working and have turned Iran into a different country.

In July 2017, Iran launched a rocket it said could deliver a satellite into space, an act the U.S. State Department called provocative. Earlier that month, the United States slapped new economic sanctions on Iran over its ballistic missile program.

Iran says its space program is peaceful, but Western experts suspect it may be a cover for developing military missile technologies.

The Trump administration considers Iran an “outlaw regime” and the world’s foremost supporter of radical Islamic terrorism. In a report (pdf) on the regime’s destructive activities, the United States accuses Tehran of human rights abuses, cybercrime, and environmental exploitation. The regime is also claimed to threaten maritime security in the region and continue facilitating illegal financial activity.