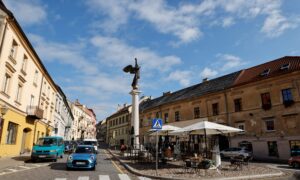 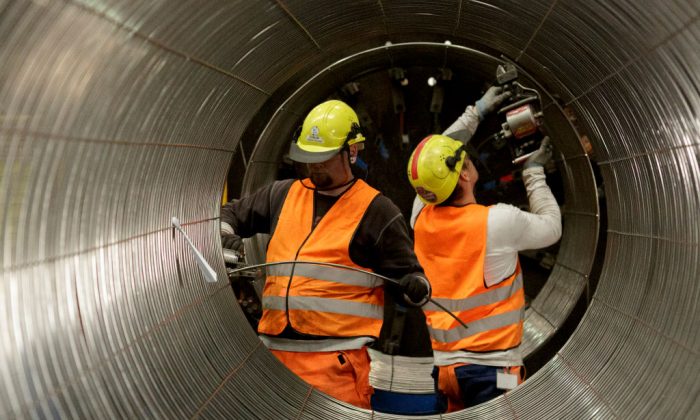 In this file photo, workers are working on a pipe in the production hall at the Nord Stream 2 facility in Sassnitz, Germany. (Carsten Koall/Getty Images)
Thinking About China

On May 19, the U.S. State Department announced that the United States would waive sanctions on the Nord Stream 2 project. The statement noted that although the United States will continue to oppose this project, believing that it will weaken European energy security and that of Ukraine and Eastern Europe, the exemption of sanctions is in line with the commitment to rebuild relationships with European allies.

This decision involves complex international relations, including the consolidation of the U.S.-Germany alliance and the improvement of U.S.-Russia relations, yet it is the U.S. government’s strategy concerns against the Chinese Communist Party (CCP) that lie behind it.

Why Is the Nord Stream 2 Project Sensitive

Germany imports at least 40 percent of its natural gas from Russia. The Nord Stream 2 gas pipeline is 759 miles long and has a capacity of 1.9 trillion cubic feet of gas per year. It stretches across the Baltic Sea, connecting Russia and northeastern Germany.

The Russian state-owned company, Public Joint Stock Company Gazprom (Gazprom), exclusively runs Nord Stream 2 and finances half of the $11.5 billion investment while the rest is covered by five Western companies.

The United States opposes Nord Stream 2 over concerns that the pipeline is bypassing Ukraine. Not only will it reduce Europe’s dependence on Ukraine for natural gas—diminishing the importance of Ukraine—but it will also exacerbate the risk of Russia invading Ukraine. The same holds true for Poland.

Europe has always regarded Russia as the biggest threat. If it solely relies on Russia for energy supplies, while in a weakened state, it could eventually face perilous circumstances. At the end of 2019, former President Donald Trump imposed sanctions against Nord Stream 2. Germany opposed the sanctions, believing they interfered with economic sovereignty.

In July 2020, Congress further expanded sanctions (pdf) against Nord Stream 2 in an amendment to H.R. 6395. The United States and Germany diverged over issues such as Nord Stream 2 and military expenditures. Trump also withdrew partial troops from Germany.

The Biden Administration Shifted Its Stance on US Interests

According to the Biden administration’s diplomatic strategy, the United States needs stronger support from Germany to tackle the challenges imposed by China and Russia. However, the Biden administration also initiated an appeasement policy toward the CCP, which provoked the CCP’s repeated confrontations and challenges. Because of this dilemma, the United States eventually chose to waive the sanctions against Nord Stream 2 and gave priority to restoring ties with its allies as a way to unite against the CCP.

A large number of ruling and opposition parties criticized the decision, calling it “a gift to Putin.” Without a doubt, Russia accepts it with pleasure.

German Foreign Minister Heiko Maas lauded it as a “constructive step” and said Germany would, “gladly continue to discuss with [their] partners in Washington.”

Secretary of State Antony Blinken said the decision was made “in the national interest of the United States.” While repairing relations with Germany, the United States has also made a strategic choice after assessing threats from China and Russia.

The US Needs to Form a Strong Alliance Against the CCP

The United States waived sanctions on the Nord Stream 2 project, and the European Union (EU) almost simultaneously froze the EU-China Comprehensive Agreement on Investment (CAI). The EU has made clear not only its attitude toward the CCP, but also its response to the Biden administration given that Biden was upset about its ditching the United States in the hurried CAI negotiations.

Germany is the strongest advocate of the CAI in the EU, and therefore the CCP regards Germany as its stronghold in Europe. Chinese leader Xi Jinping and Chinese Premier Li Keqiang have recently had telephone conversations with German Chancellor Angela Merkel, hoping that Germany will continue to help promote the CAI.

Meanwhile, the German Bundestag (federal parliament) recently issued a report criticizing the CCP for human rights abuses against religious and ethnic minorities in China and clamored for German enterprises to withdraw from China. This indicates that the strategy of the German economy to maintain a  long-term dependence on the CCP may change, and the CCP’s biggest bet on a divide between Europe and the United States, and within the EU may prove futile.

The Biden administration eschewing sanctions on Nord Stream 2 has not only consolidated ties with Germany and Europe, but also made concessions with Russia, bolstering U.S.-Russia relations. It was done in an effort to counter the biggest and most substantial threat: the CCP.

The US and Russia Improve Relationships Over Concerns for the CCP

Russia was sanctioned by the United States and European nations over its annexation of Crimea, rendering a serious blow to its economy. Overriding the Nord Stream 2 sanctions is like sending help in Russia’s hour of need.

Moreover, Russia is well aware that the United States waived the sanctions in the hopes of keeping its distance from the CCP. The U.S.-China confrontation has now become a major international affair, where Russia attempts to use the Sino-Russia relationship as a bargaining chip in exchange for improving its relationship with the United States.

In April, Putin deployed troops to the Ukraine border. Seemingly, he acted in concert with the CCP, but then withdrew the troops afterward, leaving the CCP alone in the Pacific to confront the United States.

In March, after the CCP messed up the U.S.-China diplomatic talks in Alaska, Russian Foreign Minister Sergey Lavrov met with the CCP Foreign Minister Wang Yi, seeking bargaining chips for the U.S.-Russia dialogue. The Russian Minister, who just met with the U.S. Secretary of State Antony Blinken in Iceland, stressed cooperation with the United States despite divergent opinions.

The CCP, at the outset of its establishment, launched a proxy war instigated by Stalin for the former Soviet Union in North Korea. After Sino-Russia relations went sour, the CCP turned its back on the communist alliance and embraced the United States. Now that a U.S.-China confrontation is likely inevitable, Russia will assuredly not get involved with China but will seize the opportunity to reap the benefits from both sides. The Nord Stream 2 project brings substantial benefits to Russia, therefore Russia has extended an olive branch to the United States to immediately bolster U.S.-Russia relations.

The two states were former Cold War opponents, so U.S.-Russia relations do not currently look promising. However, if Russia considers itself an onlooker, not backing the CCP amid the U.S.-China conflict, the United States may ease tensions with it at an opportune time and offer economic benefits such as Nord Stream 2.

However, the United States and Europe make no concessions to Russia for its actions, be it invading Ukraine, threatening Eastern Europe, or assassinating or imprisoning dissidents. In May, the G-7 (Group of Seven) +4 Foreign and Development Ministers’ Meeting shed light on member nations’ shared stances on adhering to international rules. Therefore, Russia will not align with the CCP against the Western alliance. Russia’s best policy would be to get the most benefit from this confrontation in exchange for easing souring relations with the West.

The four-party mechanism of the United States, Japan, India, and Australia in Indo-Pacific affairs—while excluding China—along with the United States’s grip on the wavering South Korea, has put the CCP in an isolated situation. The United States is forging an alliance against the CCP.

In fact, Russia does not want the CCP to gain the upper hand. Russia, as a former communist state, should know the evil of the communist regime. If the CCP achieves dominance, Russia as a neighboring country will be at risk. The CCP is in a bid to take over the Central Asian region and continuously weaken Russia’s clout.

Despite that Russia has reaped many benefits from the CCP, its former Soviet Union technical knowledge was stolen by the Chinese regime. When it comes to business, the CCP often plays tricks and Russia obviously knows that trading with European nations is more reliable. Many nations are removing supply chains from China and China’s economy is deteriorating, causing the Belt and Road Initiative to become unsustainable. Therefore, it is evidently unwise for Russia to bet on the CCP.

If the CCP were to gain hegemony, it would deem the border demarcation pact with Russia as a historical document and Russia, unlike the United States and Europe on the other side of the ocean, would take the brunt of security issues.

Russia should know that the CCP is a paper tiger (one who feigns power) that may be defeated in the confrontation. How could Russia opt for a potential loser?

Russia may neither join the Western anti-communist bloc, nor truly align with the CCP. On the other hand, it will continuously use the CCP as a bargaining chip and the Nord Stream 2 project is one of the bargaining chips that Russia has obtained.