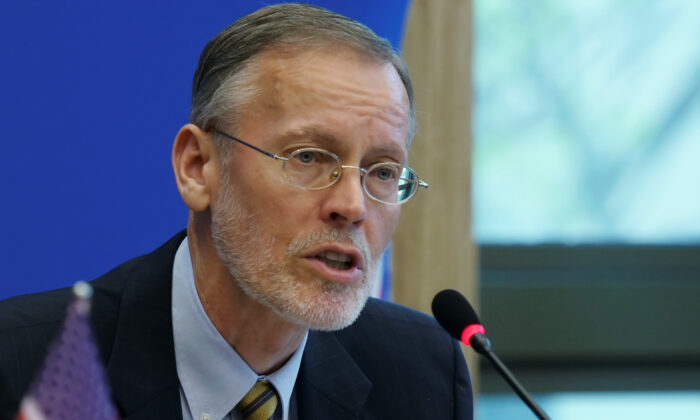 US Voices Concern Over China’s Attempts to Sway Taiwan Election

TAIPEI—The United States is concerned about China’s attempts to influence Taiwan’s presidential and parliamentary elections, the top U.S. official in Taiwan said on Nov. 22, as China stepped up pressure on the self-ruled island ahead of the vote in January.

The comment came days after Taiwan denounced China for trying to interfere in its democratic process ahead of the Jan. 11 polls, including sailing an aircraft carrier group through the Taiwan Strait on Sunday.

“We are aware that China is attempting to apply pressure through various means on Taiwan. Certainly, these attempts to influence Taiwan’s democratic process are of concern,” said Brent Christensen, the de facto U.S. ambassador to Taiwan.

“We believe that malign actors are using disinformation campaigns to make people lose faith in democratic institutions,” he told reporters in Taipei.

Beijing has in recent months stepped up efforts to “reunify” what it considers a wayward province, flying regular bomber patrols around it and seeking to isolate it diplomatically.

The United States, like most countries, has no diplomatic relations with Taiwan, but is bound by law to help provide the island with the means to defend itself. It is democratic Taiwan’s strongest backer on the international stage.

Christensen said any effort to determine the future of Taiwan by other than peaceful means, including boycotts or embargoes, was of “grave concern” to the United States.

Taiwan and the United States have very close ties, he added, noting this year’s $10 billion in U.S. arms sales to the island.

“We have, I believe, a strong relationship in security matters that we anticipate will only grow stronger.”

“China’s military preparation against Taiwan has not been slowing down. In fact, it’s been intensifying,” he told reporters.

President Tsai Ing-wen of the pro-independence Democratic Progressive Party is leading in the polls, ahead of her main rival, Han Kuo-yu of the China-friendly Kuomintang Party.

Tsai’s government has repeatedly warned of Beijing’s campaign to influence the vote, including snatching more of Taiwan’s few remaining diplomatic allies and a “warfare” of disinformation to mislead voters.

Chinese leader Xi Jinping said in January that China reserved the right to use force to bring Taiwan under its control but would strive to achieve peaceful “reunification”.

Beijing suspects Tsai of pushing for the island’s formal independence, which Xi has warned would lead to a “grave disaster.”

Taiwan has lost seven diplomatic allies to China since Tsai took office in 2016, leaving 15 nations that recognize the island.