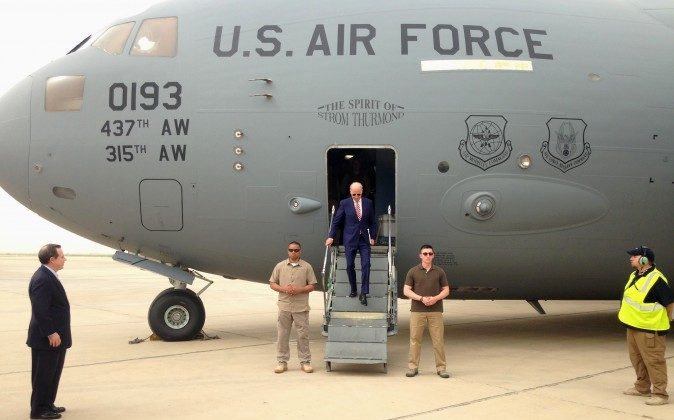 The Vice President of the United States, Joe Biden, landed in Baghdad, Iraq, mid-afternoon after an unannounced flight on April 28.

Hoping to aid the country’s top officials, who are entangled in a crippling crisis due to the war on terror, Biden met with the Iraqi Prime Minister Haider al-Abadi at Saddam Hussein’s grandiose Republican Palace.

The rest of Biden’s plans have yet to be disclosed, but the White House said he plans to meet with other leaders in an effort to boost national unity and discuss the war against Islamic extremists.

His trip was kept secret for security reasons—any journalist making the 17-hour trip alongside the vice president had to keep it secret until landing.

Wheels down in Baghdad. Here, the @VP walks to his helo with Ambassador Jones and Lieutenant General MacFarland. pic.twitter.com/2gCODEkLKa

Biden, as well as other high-ranking U.S. officials, fear the political turmoil occurring in Iraq and much of the Middle East, will deter governments from focusing on eliminating ISIS extremists.

“They’ve got a lot on their plate,” Obama said. “Now is not the time for government gridlock or bickering.”

For both the president and vice president, the next 9 months leaves them a final opportunity to set Iraq up for more peaceful times before their terms come to a close.

Both Biden and Obama entered into office with the intent to end the war—doing so in 2011. But since then, U.S. troops have returned to Iraq amid the war against ISIS.

Obama has acknowledged that his ultimate goal of stopping ISIS won’t eventuate during his time in the White House.