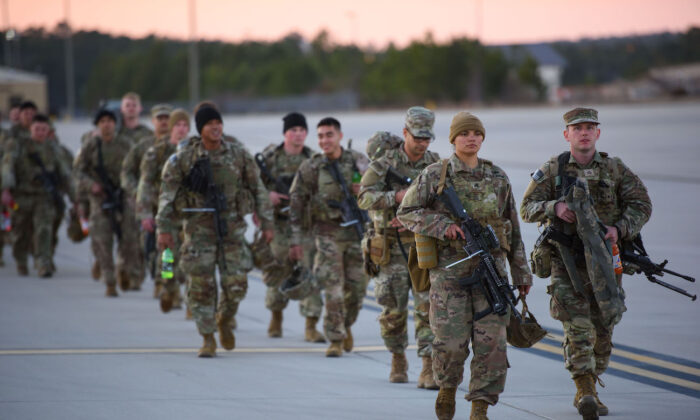 Soldiers with the 82nd Airborne division walk across the tarmac at Green Ramp to deploy to Poland at Fort Bragg, Fayetteville, North Carolina, on Feb. 14, 2022. (Melissa Sue Gerrits/Getty Images)
US News

US Veteran Suicide Rates May Be 2.4 Times Higher Than Government Reports: Study

Suicide rates among America’s military veterans are more than double that reported by the government’s Department of Veterans Affairs (VA), according to a new study published on Sept. 17 by America’s Warrior Partnership (AWP).

AWP is a national nonprofit that aims to partner with communities to prevent veteran suicide, according to its official website.

The nonprofit partnered with the University of Alabama and Duke University to gather state-provided death data while simultaneously coordinating with the Department of Defense (DoD) to establish military affiliation, and “identify commonalities of the person, military service, and their death.”

The study (pdf) is titled “Operation Deep Dive” (OpDD) and is described by AWP as a “former service member suicide and self-injury mortality study encompassing eight states and five years of death data corroborated by the DoD.”

States listed in the study are Alabama, Florida, Maine, Massachusetts, Michigan, Minnesota, Montana, and Oregon. The DoD data focused on both male and female former service members aged between 18 and 64.

AWP found that the suicide rate among veterans over the five-year period was 1.37 times more than the rate officially reported by VA.

If the eight states and age adjustment represented a national rate, there would be an average of 24 former service members (FSMs) dying each day by officially declared suicides, compared to the VA’s 2014–2018 average of 17.7 veteran suicides per day.

AWP also found that VA has not been accounting for Self-Injury Mortality (SIM), which it said is attributed predominately to overdose deaths.

VA typically categorizes deaths caused by self-injury as accidental or undetermined, but when accounting for deaths that are correlated with self-harming behaviors, the report said that 20 FSMs die per day by SIM and that over 80 percent are “coded as overdose deaths.”

If the eight states listed in the study collectively represented the national rate, the combined death rate would be at least 44 FSMs per day which is 2.4 times higher than the VA suicide rate, the study said.

The study authors said the difference in suicide figures reported by the government was likely owing to “undercounting of FSMs deaths and the greater specificity of the decedent’s demographics, military experience, and death details available to OpDD.”

It added that Self-Injury Mortality needs to be included in any analysis of FSM and veteran death, while a string of improvements are needed when it comes to death reporting across local, state, and national levels.

Elsewhere, the study also noted that individuals who served in the military for less than three years were at the greatest risk for suicide, while those who received a demotion during military service were 56 percent more likely to take their own lives.

Additionally, the study noted that former Coast Guard service members were the most likely to die from suicide, followed by Marine Corps, Army, Navy, and Air Force.

“Data indicate that FSMs are at a higher risk of dying from suicide/SIM (self-injury mortality) or natural causes such as heart disease or cancer before age 64 than those who never served in the military,” the report states.

“If we are going to make progress toward preventing former service member suicide, we need better data,” Jim Lorraine, president and CEO of AWP, said in a press release. “Inaccurate data leads to a misallocation of very valuable resources. Operation Deep Dive is designed to address this.”

In a statement to The Epoch Times, a spokesperson for the Department of Veterans Affairs said that its Annual Suicide Prevent Report is “based on verified data from the CDC and DoD, and meets the quality and standards of a peer-reviewed publication.”

If you or someone you know is experiencing a crisis or is considering suicide, has mental health issues, or engaging in substance abuse, dial or text the U.S. Suicide & Crisis Lifeline at 988 to speak with a counselor. If you’re in the UK, call the Samaritans at 116123.