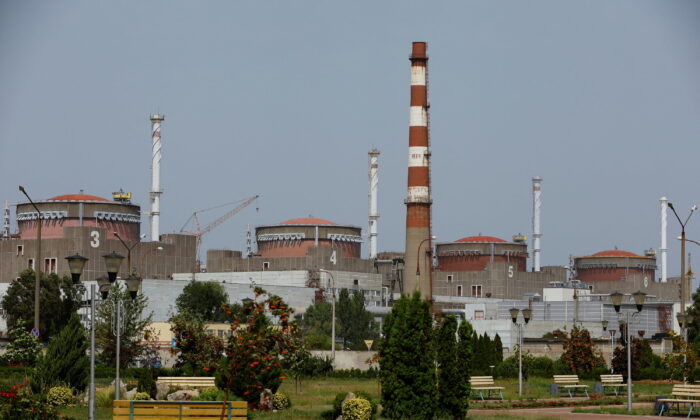 A view shows the Zaporizhzhia Nuclear Power Plant in the course of Ukraine-Russia conflict outside the Russian-controlled city of Enerhodar in Zaporizhzhia region, Ukraine, on Aug. 22, 2022. (Alexander Ermochenko/Reuters)
Russia-Ukraine War

KYIV—The United States on Tuesday urged its citizens to leave Ukraine, saying it believed Russia was preparing to target civilian and government infrastructure in the next few days as the war reaches the six-month mark.

The warning followed a ban by the Ukrainian government on celebrations in the capital Kyiv on Wednesday’s anniversary of independence from Soviet rule due to fears of attack.

Leaders of dozens of countries and international organizations were due to take part on Tuesday in the so-called Crimea Platform in solidarity with Ukraine on the Russian invasion’s six-month anniversary. Most would do so by video.

Russian forces control a large swathe of the south, including along the Black Sea coast, and chunks of the eastern Donbass region. The prospects for peace look almost non-existent.

Fearing a surge in Russian attacks, the U.S. Embassy in Kyiv on Tuesday urged U.S. citizens to leave if they could.

“The Department of State has information that Russia is stepping up efforts to launch strikes against Ukraine’s civilian infrastructure and government facilities in the coming days,” the embassy said in a statement.

U.S. citizens should leave Ukraine “now” by their own means if it was safe to do so, it said.

Although it was not the first time the United States has issued such a warning, this one was made as Ukraine was due on Wednesday to mark 31 years of independence from Soviet rule.

It also followed the killing of Darya Dugina, the daughter of a prominent Russian ultra-nationalist, in a car bomb attack near Moscow on Saturday. Moscow has blamed the killing on Ukrainian agents, an accusation Kyiv denies.

Ukrainian President Volodymyr Zelenskyy has also said Moscow could try “something particularly ugly” in the run-up to Wednesday’s anniversary.

The mood in Kyiv remained calm on Tuesday, with many people still wandering the streets with smiling faces, but signs of the increased threat could be felt.

Authorities have told Ukrainians nationwide to work from home where possible from Tuesday to Thursday, also urging people to take air raid warnings seriously and seek shelter when sirens sound.

The Kyiv city administration banned large public gatherings until Thursday, fearing that a crowd of celebrating residents could become a target for a Russian missile strike.

Polish President Andrzej Duda, one of Ukraine’s strongest supporters, was in the capital on Tuesday to discuss further support for Ukraine with Zelenskyy, including military aid.

Russian shelling hit the eastern city of Kharkiv—Ukraine’s second-largest city—around dawn on Tuesday, regional governor Oleh Synehubov said. A house had been hit but no one was hurt, he said.

In the south, Ukraine claimed Russia fired artillery and mounted air strikes in several towns in the Zaporizhzhia region, where Russian forces captured the nuclear power plant shortly after the start of the invasion.

Artillery and rocket fire near the Zaporizhzhia nuclear reactor complex, on the south bank of the Dnipro River, has led to calls for the area to be demilitarized.

The two sides have traded blame over frequent shelling at the plant. Kyiv accuses Moscow of basing troops and storing military hardware there. Russia denies this and accuses Ukraine of attacking Zaporizhzhia with drones.

Russia’s defense ministry said its forces had downed a Ukrainian SU-27 warplane over the Kharkiv region.

The U.N. High Commissioner for Human Rights said on Monday that 5,587 civilians had been killed and 7,890 wounded between Feb. 24 and Aug. 21, mainly from artillery, rocket, and missile attacks. The U.N. children’s agency UNICEF said at least 972 children have been killed or injured over six months of war.

Russia has not said how many of its soldiers have been killed.

Reuters has been unable to verify military losses.