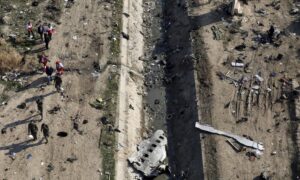 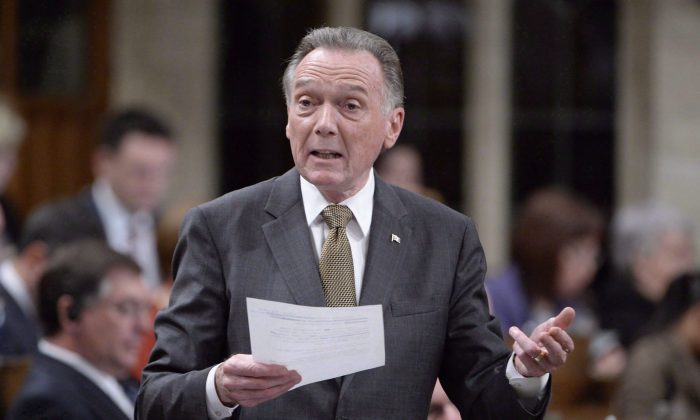 Conservative MP Peter Kent speaks during question period in the House of Commons on April 11, 2017. Opposition parties have accused the government of approving the takeover of Norsat International by a Chinese communications company without a full security review, and Washington says the deal puts American national security in jeopardy. (The Canadian Press/Adrian Wyld)
Canada

US Upset With Ottawa Over Chinese Tech Firm Deal

OTTAWA—Canada consulted with the United States before it decided the takeover of a Vancouver tech firm by a Chinese communications company did not pose any national security concerns, Prime Minister Justin Trudeau says.

But warning flags about the deal are still popping up in the United States, whose military is one of the biggest customers of Norsat International, maker of satellite receivers for security and military use.

Hytera Communications, a privately owned Chinese communications company that manufactures radio transceivers and radio systems, made a bid to take over Norsat in 2016.

The move triggered a requirement under the Investment Canada Act that the government must examine takeover bids of Canadian companies by foreign-owned firms to determine if the takeover raises national security concerns.

But earlier this month, Norsat said it was told a preliminary review determined there was no need to proceed to a full national security review, paving the way for the takeover to proceed.

The Opposition Conservatives argue that this was a mistake. Conservative MP Peter Kent accused the Liberals of jeopardizing Canada-U.S. relations.

The Liberals have clumsily put at risk relations with our best friend, trade partner, and protector.
— Conservative MP Peter Kent

“While the Liberals may be willing to jeopardize our security interests, selling Norsat for a trade deal with China, they have clumsily put at risk relations with our best friend, trade partner, and protector,” Kent said during question period on June 13.

He cited comments made by Michael Wessel, commissioner of the U.S.-China Economic and Security Review Commission, who said this week that the U.S. military should review its dealings with Norsat, and that the U.S. Congressional Committee on Foreign Investment should look at this particular deal made by Canada.

Lt. Col. Roger Cabiness, spokesman for the U.S. Department of Defense, said the Pentagon couldn’t comment on the matter specifically.

“However, the Department of Defense emphasizes that transfers of sensitive technologies and capabilities should be carefully vetted to mitigate potential risks to U.S. and allied security interests,” Cabiness said.

Canada’s opposition parties have accused the government of approving the deal without a full security review, a move they say was meant to appease China ahead of possible free trade negotiations.

In question period on June 13, Trudeau said Canada’s national security experts assessed both the takeover and the technology involved and determined that there were no national security concerns. The review process included consultations with allies, he said.

“I can say that we consulted the United States on this particular case, and as a government we respect and follow the recommendations of our allies and our national security agencies,” Trudeau said in French.

Concerns about the Hytera takeover include fears that even privately owned Chinese enterprises are subject to influence from the Chinese regime. In March, Hytera was sued by Motorola Solutions over allegations that three engineers who left Motorola to work for Hytera stole patents and trade secrets.

When a foreign bid is raised, the first step is a preliminary consultation with security experts from a number of agencies and departments, including the Canadian Security Intelligence Service, the Department of National Defence, and Communications Security Establishment Canada, Malcolm Brown, the deputy minister for Public Safety, had explained to MPs on June 12.

Brown said a “full-blown review” is the final step in a specific process but that all steps have their own significance.

“There is quite substantial review that is taken at every step,” he said.

Economic Development Minister Navdeep Bains said the review that was done was thorough and insisted there are no risks to national security from the plan.

“Did Canada’s national security agencies examine this deal? Yes, they did. Did the government follow the security agencies’ recommendation? Yes, we did. We have done our due diligence,” he said during question period last week.

Michael Byers, Canada Research Chair in Global Politics and International Law at the University of British Columbia, said every transaction like this should proceed to a full review.

Meanwhile, Norsat says it may accept a better offer from an American investment fund. The company says Privet Fund Management LLC values it at US$67.3 million, which is slightly higher than the deal proposed by Hytera.

From The Canadian Press, with files from Alexander Panetta in Washington