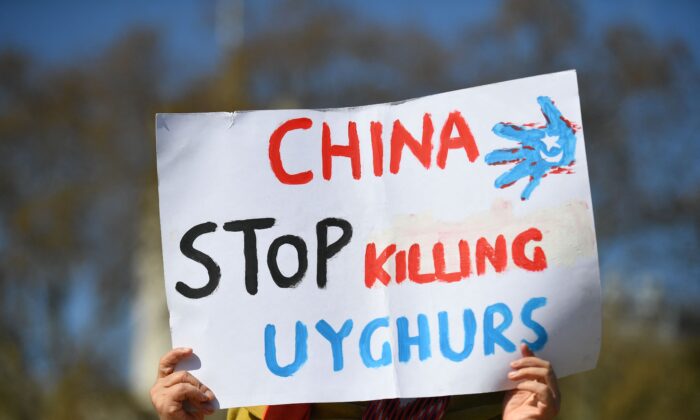 A member of the Uyghur community holds a placard as she joins a demonstration to call on the British parliament to vote to recognise alleged persecution of China's Muslim minority Uyghur people as genocide and crimes against humanity in London on April 22, 2021. (Justin Tallis/AFP via Getty Images)
US-China Relations

US Universities Urged to Divest From China Over Human Rights Abuses

Bipartisan lawmakers, political figures, and advocates have called on American universities to divest from China over its human rights abuses.

A letter from the Athenai Institute, a student-led advocacy group targeting Chinese influence on college campuses, to the presidents and governing boards of America’s leading public universities calls for divesting from all entities complicit in the Chinese Communist Party’s “global campaign to exterminate the culture, religion, and language of the Uyghur people” along with other repressive practices on the part of Beijing.

“The Chinese government’s atrocities against Uyghurs, including the forced detention of more than one million civilians, forced sterilizations of thousands of Uygur women, widespread restrictions on free religious practices, widespread use of torture, and efforts to reduce or eliminate entirely the use of the Uyghur language, amount to genocide,” the letter states.

The letter goes on to note that in March 2021, the Biden administration formally endorsed the broad bipartisan determination that Beijing’s conduct toward the Uyghurs amounts to genocide. It cites the findings of a London-based independent people’s tribunal, which made a formal declaration in December that the myriad abuses inflicted on the Uyghurs of western China indeed have crossed the line into genocide.

The genocide, as well as Beijing’s other human rights abuses, also prompted a host of nations including Britain, Canada, the United States, Australia, and Lithuania to announce diplomatic boycotts of the Winter Olympics held in Beijing.

Far from being passive observers of the genocide and other abuses, Chinese firms are actively complicit, the letter charges. The role of Chinese companies in pioneering facial recognition technology used to identify and monitor Uyghurs, and in ethically dubious medical experiments, means that investing in such firms supports the regime’s abuses, the letter said. Many of these Chinese firms have been blacklisted by Washington as a result of such activities.

“For these reasons, we are asking you to take all possible steps to investigate your institution’s endowment, including the endowment of any institutionally related foundation, for ties to entities complicit in the genocide of Uyghurs, and to divest from any such holdings,” the letter states.

“In doing so, you will protect the independence needed to keep your students safe, promote academic freedom, and stay true to the values you profess,” the letter adds.

The role of U.S. universities in supporting Chinese firms, including some controlled by the Chinese Communist Party (CCP), through investments or collaboration has been subject of scrutiny in past years.

More than two dozen U.S. universities entered into financial arrangements with China-based entities during the past year totaling more than $120 million, according to federal data.

In response to these revelations, Sen. Marco Rubio (R-Fla.) told The Epoch Times that the CCP “is exploiting our education and research institutions to steal our secrets and gain influence.”