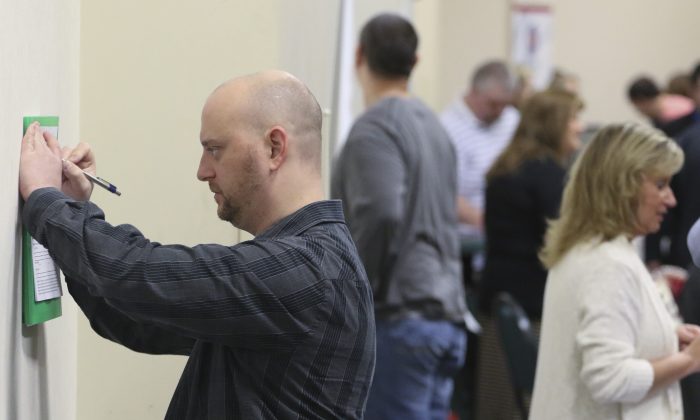 US Unemployment Aid Applications Rise to 281,000

Weekly applications rose 14,000 to a seasonally adjusted 281,000, the Labor Department said Thursday. The climb occurred after applications plummeted to match a 15-year low in the previous week.

Applications are a proxy for layoffs, so the steep decline in the last 12 months suggests that companies are cutting fewer jobs.

Meanwhile, the number of people receiving benefits fell to 2.3 million, the fewest in more than 14 years. That partly reflects the drop in layoffs and improving job market. But it also dropped because the federal government’s extended benefits program, which added more weeks of jobless aid to the 26 weeks provided by most states, expired at the beginning of 2014.

As a result, one reason fewer people are receiving aid is that they have used up all the weeks available.

Economists are watching the unemployment benefits data a bit more closely after hiring stumbled in March.

The government said last week that employers added just 126,000 jobs that month, the fewest in 15 months and snapping a yearlong streak of monthly gains above 200,000. The unemployment rate remained 5.5 percent.

The slowdown in hiring followed a raft of indicators that pointed to a slowing economy. Factory output has fallen this year as businesses are placing fewer orders for industrial machinery and other equipment. Lower oil prices, in particular, have reduced demand for drilling equipment.

Consumers have also remained cautious about spending, despite solid job growth and cheaper gas. Many Americans appear to be saving the windfall from lower prices at the pump or using it to pay down debt.

Harsh winter weather has also weighed on growth, as cold temperatures and snowstorms kept people away from stores and open houses. The stronger dollar has made U.S. exports more expensive, cutting overseas sales.

Still, applications for unemployment benefits have remained low, suggesting that weaker growth may have caused businesses to delay hiring, but it hasn’t panicked them into cutting jobs.

Other data this week suggest the economic slowdown could be temporary, a sign hiring may rebound. A survey of services firms, such as retailers, banks, and construction companies, found that they grew at a healthy pace last month. And government data released Tuesday showed that the number of available jobs climbed to a 14-year high in February, a sign that hiring could pick up in coming months.