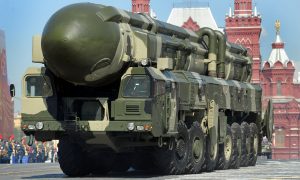 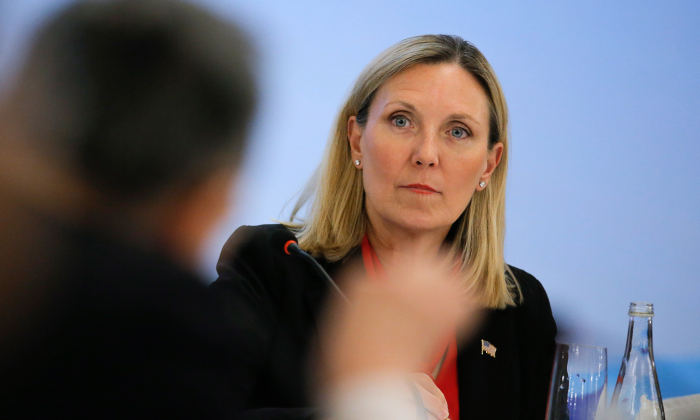 Undersecretary of State Andrea Thompson attends a panel discussion after the Treaty on the Non-Proliferation of Nuclear Weapons (NPT) conference in Beijing on Jan. 31, 2019. (Thomas Peter/AFP/Getty Images)
World

US Undecided About Extending Nuclear Arms Control Treaty With Russia

The United States has not made a decision about extending a key nuclear arms pact with Russia, a senior Trump administration arms control official told lawmakers on May 15.

The New Strategic Arms Reduction Treaty (New START), which came into effect in 2011, is set to expire in February 2021. The treaty capped the number of missiles, bombers, warheads, and launchers the two nations can possess.

“To be direct: The administration has not made any decision on a potential extension of New START,” State Department Undersecretary Andrea Thompson told lawmakers on the Senate Armed Forces Committee. “While some might argue that there is an urgent need to extend right now, we must be careful to assess all of the complexities and changes in the evolving security environment since the Treaty was signed in 2010.”

Thompson told lawmakers that while the United States and Russia are in compliance with New START, U.S. officials are concerned because Russia is undertaking a complete modernization of its nuclear forces.

Thompson added that the internal discussions are also taking into consideration the new global security environment.

“When the treaty was negotiated, we were in a more benign security environment, where relations between the great powers were less tense and mistrustful,” Thompson said.

“However, in the intervening years, the security environment deteriorated significantly, and increased uncertainty and risk pervades,” she added, specifically pointing to Russia’s invasion and annexation of eastern Ukraine.

U.S. officials’ discussions about New START are shaped by Russia’s stained record of violating arms treaties and commitments. In 2018, the United States withdrew from the Intermediate-Range Nuclear Forces (INF) Treaty with Russia after accusing Moscow of violating the treaty. The United States also considers Russia to be in violation of the Chemical Weapons Convention, the Open Skies Treaty, and the Conventional Forces in Europe Treaty.

Thompson also noted that China is rapidly modernizing and expanding its nuclear arsenal, while both Russia and the United States are restricted by the treaty. According to official figures, China’s nuclear forces are much smaller than those of the United States and Russia, but the communist regime hasn’t been transparent about the scope and scale of its nuclear program.

“The United States has tried to raise mechanisms with the Chinese to discuss these issues but our efforts have so far been rebuffed,” Thompson said. “China currently benefits from having the two largest nuclear powers restrained, while it can pursue competition on its own terms. That status quo is unacceptable.”

David Trachtenberg, the deputy undersecretary of defense for policy at the Department of Defense, confirmed Thompson’s assertion, telling lawmakers that the re-emergence of long-term strategic competition poses the greatest risk to the security of the United States. While Washington has slashed its nuclear arsenal by 85 percent, China and Russia are vigorously pursuing new types of nuclear-capable weapons systems.

“Unfortunately, Russia and China have chosen a different path and have increased the role of nuclear weapons in their strategies and actively increased the size and sophistication of their nuclear forces,” Trachtenberg said.

In his first call with Putin in February 2017, President Donald Trump said that New START was a bad deal for the United States, according to Reuters. The president was likely referring to the fact that the treaty required the United States to reduce the number of nuclear warheads, while allowing Russia to catch up to the capped amount of 1,550 warheads.

Concerns about China also played into Trump’s decision to exit the INF treaty. While Washington and Moscow banned intermediate-range ground-launched missiles, Beijing developed a battery of such weapons. When Trump announced his intent to exit the INF, he said he hoped to eventually negotiate a treaty that includes China.

Sen. Bob Menendez (D-N.J.), who is in favor of extending New START, pressed Thompson on whether doing so is currently in the best interest of the United States.

“Too soon to tell, Senator,” Thompson replied. “We’re in an interagency process. The treaty, as it stands, is postured for today. Next 5 to 10 years, I can’t say.”

“If New START expires, could Russia target the United States with hundreds or perhaps even thousands of additional nuclear warheads?” Menendez asked.

“No, it’s a good question for you,” Menendez shot back. “You know this disdain that the State Department has when they come here? I don’t appreciate it.”

“I’m not asking Russia about our national defense,” Menendez yelled. “I’m asking you.”

Thompson ultimately declined to answer because the question was hypothetical.

Thompson and Trachtenberg spoke to lawmakers about New START one day after Secretary of State Mike Pompeo met with Russian Foreign Minister Sergey Lavrov and Putin in Russia to discuss arms control, among other topics.