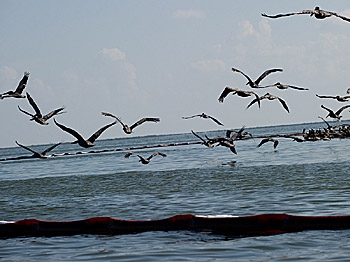 By Marco t'Hoen
Print
The BP oil spill in the Gulf of Mexico will not affect relations between the United Kingdom and the United States. Both President Barack Obama and U.K. Prime Minister David Cameron are receiving plenty of pressure.

The British business sector fears the BP crisis might cause trade relations with the United States to worsen. BP’s shares have dropped dramatically since the spill began in April. Many U.K. pension funds hold shares of BP.

According to BBC, Attorney General Eric Holden assured U.S. citizens on Thursday that the oil spill will not cost them “a dime.” BP has agreed to pay compensation claims, and the Obama administration is now making sure BP is able to do just that.

U.S. State Department spokesman P.J. Crowley said to reporters “This is not about relations between the United States and its closest ally.”

Cameron said on Thursday that he understood the “frustration” of the United States. He will discuss the issue of BP in an upcoming meeting with Obama. His administration expressed a willingness to aid BP in the handling of the oil spill.