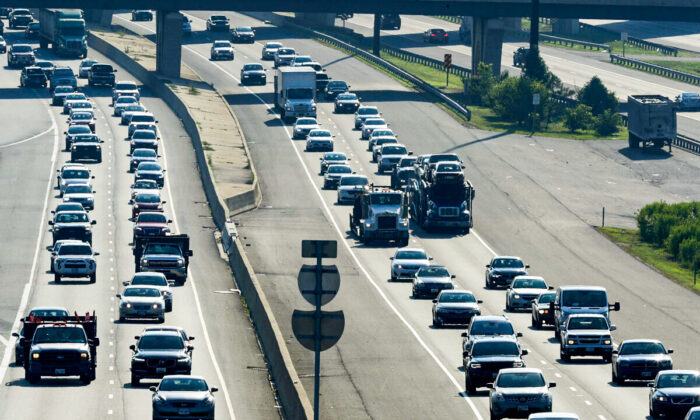 Vehicles travel on the Capitol Beltway in a file image in Fort Washington, Md. (Chip Somodevilla/Getty Images)
District of Columbia

US Trucker Convoy to ‘Shut Down’ Traffic on Major Roads Outside Washington: Organizer

One of the U.S. trucker convoys planning to leave this week plans to shut down traffic on the Capital Beltway outside Washington.

“We’re going to have a shutdown,” Bob Bolus, the organizer, told The Epoch Times. “We’ll shut it down.”

The Beltway encircles Washington, running through portions of Maryland and Virginia, and passes through a small part of the nation’s capital.

Bolus plans to lead a convoy from Scranton, Pennsylvania, where he owns a tow truck company, starting Feb. 23. After a stop in Harrisburg, Pennsylvania, the convoy is estimated to arrive in Washington in the afternoon that day.

Bolus, who said the convoy will be peaceful, declined to answer directly if truckers plan to halt traffic purposely, although he did say lanes would be kept open for emergency responders.

“It’s too bad if it disrupts traffic,” Bolus said. “[People] should stay home then, because it’s going to be disruptive. I don’t care if it was considered an accident on the Beltway, and traffic got backed up. It is what it’s going to be. We have every right to be on the Beltway and on every other road in the interstate system of the United States.”

There’s no set timeframe for how long the protest will last. The convoy is protesting against COVID-19 vaccine mandates, the stream of illegal immigrants crossing the United States’ southern border, and other policies of President Joe Biden’s administration.

Other convoys also plan to arrive in Washington, although the one Bolus is leading may be the first.

Organizers of one of the largest movements, dubbed The People’s Convoy, announced on Feb. 20 they would reach “the DC Beltway area” on March 5. That convoy is scheduled to leave from Adelanto Stadium, outside Los Angeles, on Feb. 23.

In a statement, organizers said the group “will abide by agreements with local authorities, and terminate in the vicinity of the DC area, but will NOT be going into DC proper.”

Officials in the Washington area said recently they were preparing for possible disruptions to traffic and events in the area in early March.

The U.S. Capitol Police and its partners are adding extra security for Biden’s State of the Union address, which is scheduled for March 1, and Washington Police Chief Robert Contee said in a recent briefing that “there will be disruptions to traffic.”

“As for all of our First Amendment demonstrations that happen here in the city, we have to be in a posture of preparedness,” Contee said.

Authorities in Virginia and Maryland, which abut Washington, said they’re aware of the convoy and others like it.

“The Virginia State Police has been and continues to monitor the situation and to communicate with our National Capital Region local, state, and federal partners. This is standard practice any time the potential exists for a significant protest that could disrupt the safe and efficient flow of traffic on Virginia highways,” a spokesperson for the state police told The Epoch Times in an email on Feb. 21.

“State police are coordinating with public safety partners in neighboring states and will be ready to respond appropriately with adequate resources to ensure the free flow of traffic throughout the routes of travel.”

Brian Brase, one of the organizers of The People’s Convoy, told The Epoch Times previously that there “is a plan in place” upon arrival in the Washington area, but declined to share details. Leigh Dundas, who is helping with some of the details, said the convoy is “not looking to obstruct” and is “planning on abiding by the rules of the road.”

The reason for not going downtown, Bolus said, is because of concerns over the treatment of people who were there at the U.S. Capitol during the “Stop the Steal” rally on Jan. 6, 2021.

“I’m not going to subject myself or anybody else to the whims of the federal government in downtown D.C.,” he said. “I already spoke to the D.C. police department and I’m in communication with them. If he’s willing to give us an escort through D.C., we’ll consider it without arrest and [expletive]. But we’re not going to subject ourselves to the Gestapo tactics and some of the federal judges in D.C.”